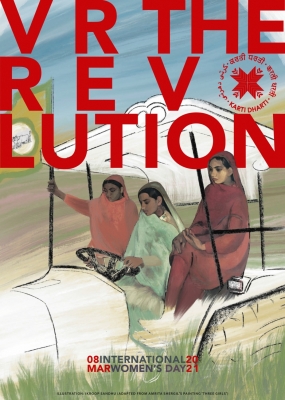 New Delhi– “It’s important for me as a person to comment on social and political issues. Social media is a powerful tool to project my opinions into the world. It is also a great place to find alternate points of view and to engage with people outside of our echo chambers. My tool is drawing, so that is what I use to express myself,” says artist Ikroop Sandhu, whose illustration, re-imagining painter Amrita Shergill’s famous ‘Three Girls’ to mark Woman’s Day during the ongoing farmers’ agitation went viral.

This BA (Philosophy) graduate from LSR in New Delhi, who later did a course in animation from Vancouver has been following the farmers’ protest ever since BKU (Ugrahan) set up a morcha.

“Initially I was an observer, but as things progressed, a friend of mine – Sangeet Toor set up a women led publication called ‘Karti-Dhatri’. She asked if I could make an illustration for their first issue. That got the wheels of my mind turning. I had been thinking about the contrasting images of women farmers astride tractors from this protest versus their docile depiction in paintings, films and literature. In fact, women farmers are largely invisible and categorised as rural women while their active role as farmers is overlooked even today.

“Amrita Shergill’s beautiful and melancholic painting of three women came to mind, and I wondered if I could use them as a visual quote in the current dialogue around representation of women farmers. That is how the illustration came about. It was printed for the Women’s Day celebration instead, and filmmaker Gurvinder Singh designed the poster. It was a spontaneous collaboration,” she remembers.

Talking about artists’ relationships with protest sites, especially as seen during the CAA-NRC protests and the ongoing farmers’ agitation, Sandhu feels that art is an exercise in observation whether one is painting a landscape, drawing a political cartoon or making a film. That this keenness to observe emerges from curiosity. “It could be that artists are curious people or that curious people become artists. Protest sites with their continual improvisations and diversity of engagement is like a Petri dish for a curious mind. So it makes sense as to why young and old creative people would want to participate and study this human experiment.”

The artist, who moved to Dharamshala from Delhi just before the lockdown is quite optimistic about the future of graphic novels in the country.

“We are seeing a plethora of independent publishers who are putting out high quality visual work. As comics go digital, more experimental and interactive work from Indian creators will emerge. I am optimistic about this ever growing readership and the shifts in visual mediums,” she says. (IANS)