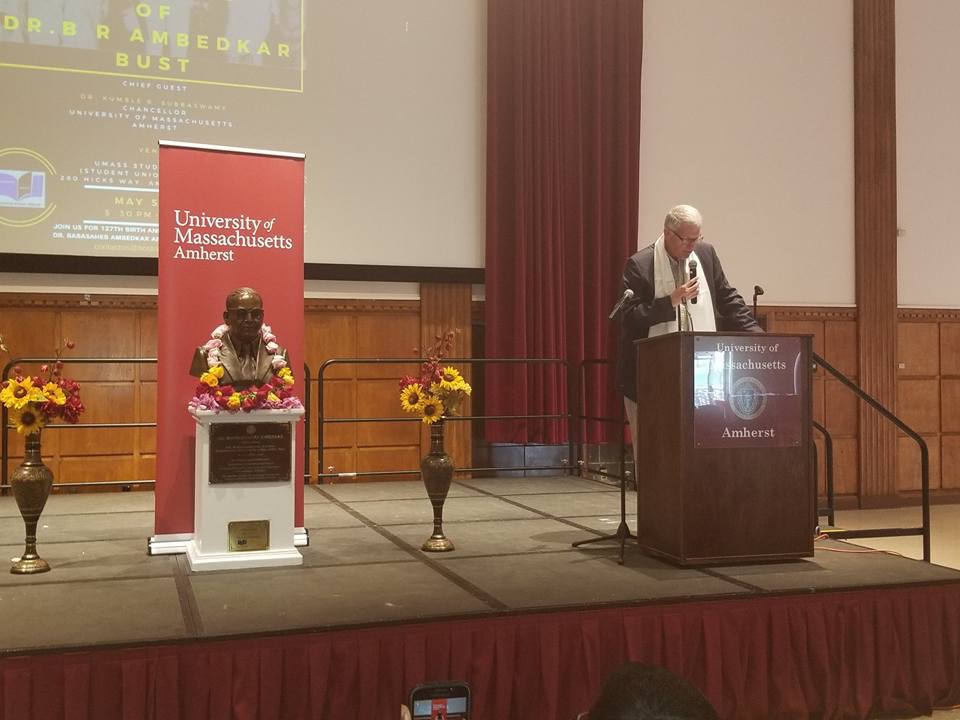 Boston Study Group, a Boston-based organization dedicated to working towards a just and equitable society, supported the installation of Dr. B.R. Ambedkar’s bust that was inaugurated at the University of Massachusetts-Amherst on May 5, 2018.

The unveiling of the bust; which is made of brass, weighing at 40 pounds took place on Saturday 5 May at the Students Union Ballroom. The occasion was graced by the Deputy Chancellor of the University, Steve Goodwin, academics like Sangeeta Kamat and Amilcar Shabazz, as well as the members of Ambedkarite community from across North America and South-Asia. The event coincided with the International Conference on “Caste and Race: Reconfiguring Solidarities: Unfinished Legacy of Dr B R Ambedkar”  organized at the University of Massachusetts (Amherst), also co-sponsored by BSG. 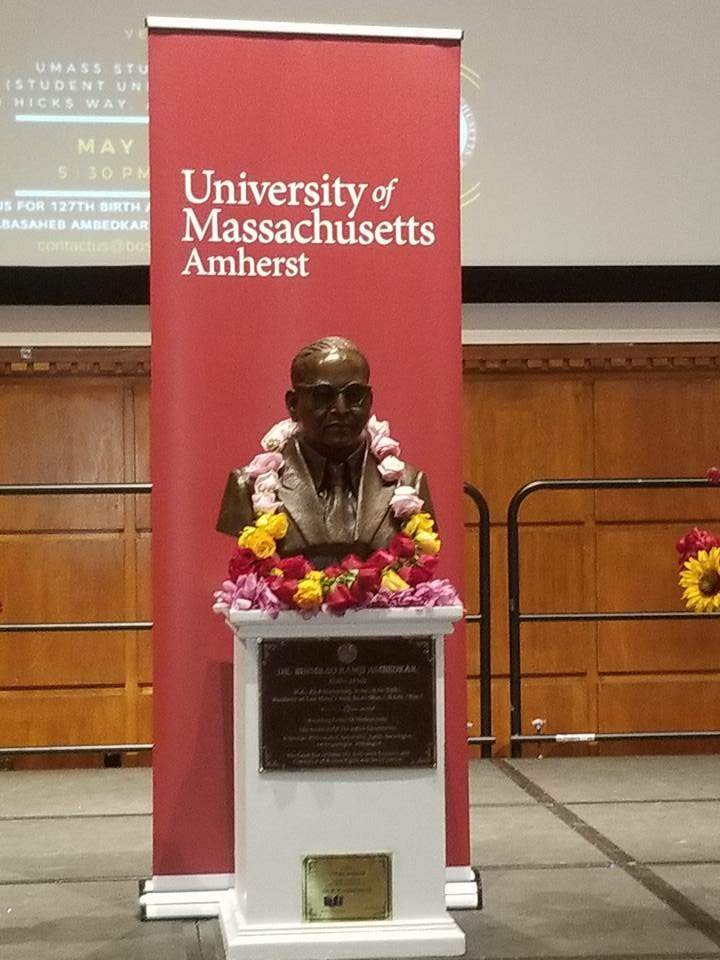 The president of BSG, Sanjay Bhagat, welcomed the participants and said that BSG had been in operation for less than four years. “In the past four years of our existence we have pioneered engagements with the academic community as well as social organizations on the issues of caste, race, gender and social exclusion,” he informed the audience.

“BSG is dedicating extraordinary efforts to further the vision of B.R. Ambedkar. Much credit goes to the hard work of BSG members that brought about such a large gathering at the conference,” he said. As Ambedkarites around the Boston area have been growing in numbers, BSG’s membership has been increasing rapidly to form a strong form of community and belonging, he noted.

On this occasion of unveiling of Dr. Ambedkar’s bust, the Deputy Chancellor, Steve Goodwin reflected on the connection of African-American intellectual and leader, Dr. W.E.B.Du Bois, and Dr. B.R. Ambedkar, who had similar life experiences and travelled parallel paths in the civil rights struggle. He mentioned that having Dr. Ambedkar’s bust at the university would allow them to explore the lives and legacies of these two great men together in order to develop better understanding of being ‘Global Humans’. He said, “Dr B.R. Ambedkar stands as an inspirational reminder of democracy and equal rights for all and embodies the value of education. Thus, his works, legacy and lessons are very relevant in today’s times.”

In order to enable the participation of students and research scholars from underprivileged backgrounds in India, BSG sponsored their travel and accommodation. The proud recipients of this scholarship were Harshali Nagrale, Vikas Tatad, Vishal Kamble, Maya Bansode and Sunil Yadav from Tata Institute of Social Science (TISS), Mumbai. The research scholars’ papers generated excitement in the audience for their timely deliberations on contemporary Dalit student and social movements.

In order to celebrate Dr. B.R. Ambedkar’s 127th birth anniversary on this occasion, BSG organized a dinner for the conference participants on Saturday, May 5, followed by a cultural evening, ‘Utsav’, which featured poetry, music, dance and art work by various Indian and African-American artists. The evening concluded with BSG honoring several luminaries who have contributed to the advancement of Ambedkarite thought and anti-caste activism globally. Awardees included Gary Michael Tartakov, Amilcar Shabazz, Sangeeta Kamat, Vinaya Khobragade and Rajkumar Kamble. BSG also felicitated Isabel Wilkerson Pulitzer prize winner of the book ‘Warmth of Other Suns: The Epic Story of America’s Great Migration’ for her contribution to developing critical conversations around caste debates in America.

BSG’s foundation is based on developing critical conversations around caste, race and gender through studying Dr. Ambedkar’s ideology and a call for ‘Annihilation of Caste’ while working in solidarity with various other social struggles in US.