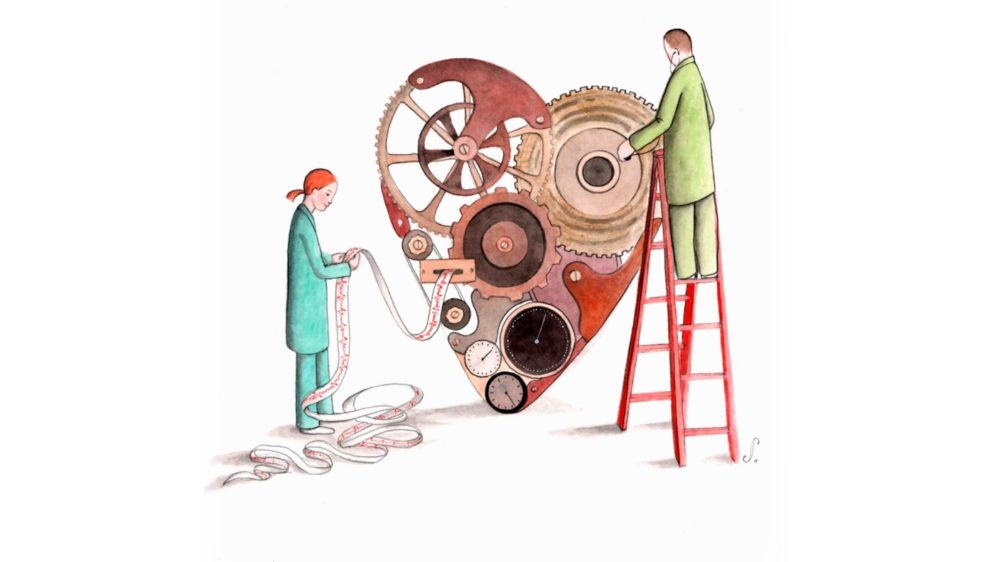 “They gave each other a smile with a future in it.”
—Ring Lardner

Love’s warm squishiness seems a thing far removed from the cold, hard reality of science. Yet the two do meet, whether in lab tests for surging hormones or in austere chambers where MRI scanners noisily thunk and peer into brains that ignite at glimpses of their soulmates.

When it comes to thinking deeply about love, poets, philosophers, and even high school boys gazing dreamily at girls two rows over have a significant head start on science. But the field is gamely racing to catch up.

One database of scientific publications turns up more than 6,600 pages of results in a search for the word “love.” The National Institutes of Health (NIH) is conducting 18 clinical trials on it (though, like love itself, NIH’s “love” can have layered meanings, including as an acronym for a study of Crohn’s disease). Though not normally considered an intestinal ailment, love is often described as an illness, and the smitten as lovesick. Comedian George Burns once described love as something like a backache: “It doesn’t show up on X-rays, but you know it’s there.”

Richard Schwartz, associate professor of psychiatry at Harvard Medical School (HMS) and a consultant to McLean and Massachusetts General (MGH) hospitals, says it’s never been proven that love makes you physically sick, though it does raise levels of cortisol, a stress hormone that has been shown to suppress immune function.

Love also turns on the neurotransmitter dopamine, which is known to stimulate the brain’s pleasure centers. Couple that with a drop in levels of serotonin — which adds a dash of obsession — and you have the crazy, pleasing, stupefied, urgent love of infatuation.

It’s also true, Schwartz said, that like the moon — a trigger of its own legendary form of madness — love has its phases.

“It’s fairly complex, and we only know a little about it,” Schwartz said. “There are different phases and moods of love. The early phase of love is quite different” from later phases.

During the first love-year, serotonin levels gradually return to normal, and the “stupid” and “obsessive” aspects of the condition moderate. That period is followed by increases in the hormone oxytocin, a neurotransmitter associated with a calmer, more mature form of love. The oxytocin helps cement bonds, raise immune function, and begin to confer the health benefits found in married couples, who tend to live longer, have fewer strokes and heart attacks, be less depressed, and have higher survival rates from major surgery and cancer.

Schwartz has built a career around studying the love, hate, indifference, and other emotions that mark our complex relationships. And, though science is learning more in the lab than ever before, he said he still has learned far more counseling couples. His wife and sometime collaborator, Jacqueline Olds, also an associate professor of psychiatry at HMS and a consultant to McLean and MGH, agrees.

More knowledge, but struggling to understand

“I think we know a lot more scientifically about love and the brain than we did a couple of decades ago, but I don’t think it tells us very much that we didn’t already know about love,” Schwartz said. “It’s kind of interesting, it’s kind of fun [to study]. But do we think that makes us better at love, or helping people with love? Probably not much.”

Love and companionship have made indelible marks on Schwartz and Olds. Though they have separate careers, they’re separate together, working from discrete offices across the hall from each other in their stately Cambridge home. Each has a professional practice and independently trains psychiatry students, but they’ve also collaborated on two books about loneliness and one on marriage. Their own union has lasted 39 years, and they raised two children. 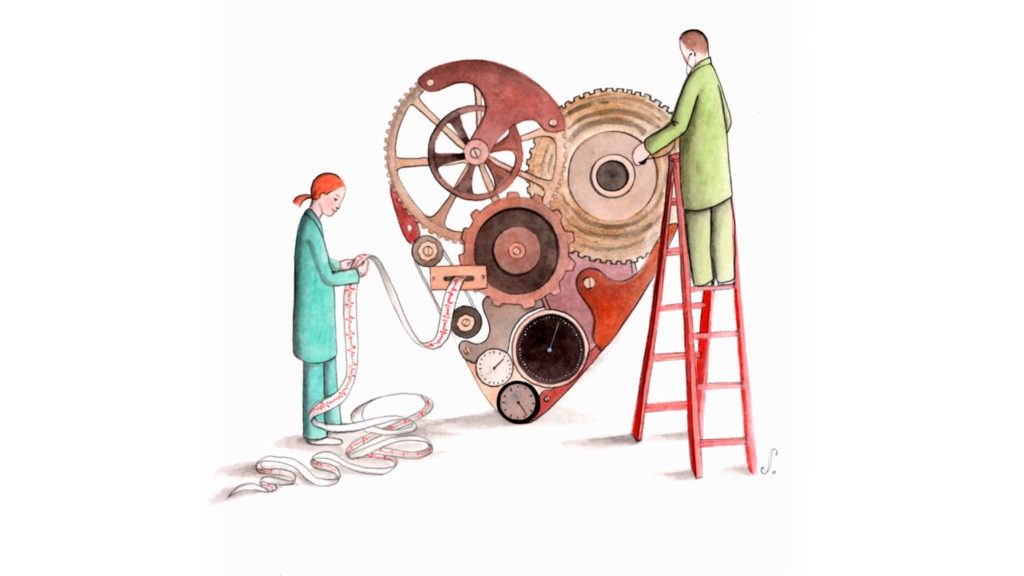 “I have learned much more from doing couples therapy, and being in a couple’s relationship” than from science, Olds said. “But every now and again, something like the fMRI or chemical studies can help you make the point better. If you say to somebody, ‘I think you’re doing this, and it’s terrible for a relationship,’ they may not pay attention. If you say, ‘It’s corrosive, and it’s causing your cortisol to go way up,’ then they really sit up and listen.”

A side benefit is that examining other couples’ trials and tribulations has helped their own relationship over the inevitable rocky bumps, Olds said.

“To some extent, being a psychiatrist allows you a privileged window into other people’s triumphs and mistakes,” Olds said. “And because you get to learn from them as they learn from you, when you work with somebody 10 years older than you, you learn what mistakes 10 years down the line might be.”

People have written for centuries about love shifting from passionate to companionate, something Schwartz called “both a good and a sad thing.” Different couples experience that shift differently. While the passion fades for some, others keep its flames burning, while still others are able to rekindle the fires.

“You have a tidal-like motion of closeness and drifting apart, closeness and drifting apart,” Olds said. “And you have to have one person have a ‘distance alarm’ to notice the drifting apart so there can be a reconnection … One could say that in the couples who are most successful at keeping their relationship alive over the years, there’s an element of companionate love and an element of passionate love. And those each get reawakened in that drifting back and forth, the ebb and flow of lasting relationships.”

Children as the biggest stressor

Children remain the biggest stressor on relationships, Olds said, adding that it seems a particular problem these days. Young parents feel pressure to raise kids perfectly, even at the risk of their own relationships. Kids are a constant presence for parents. The days when child care consisted of the instruction “Go play outside” while mom and dad reconnected over cocktails are largely gone.

When not hovering over children, America’s workaholic culture, coupled with technology’s 24/7 intrusiveness, can make it hard for partners to pay attention to each other in the evenings and even on weekends. It is a problem that Olds sees even in environments that ought to know better, such as psychiatry residency programs.

“There are all these sweet young doctors who are trying to have families while they’re in residency,” Olds said. “And the residencies work them so hard there’s barely time for their relationship or having children or taking care of children. So, we’re always trying to balance the fact that, in psychiatry, we stand for psychological good health, but [in] the residency we run, sometimes we don’t practice everything we preach.”

All this busy-ness has affected non-romantic relationships too, which has a ripple effect on the romantic ones, Olds said. A respected national social survey has shown that in recent years people have gone from having three close friends to two, with one of those their romantic partner.

Since the rising challenges of modern life aren’t going to change soon, Schwartz and Olds said couples should try to adopt ways to fortify their relationships for life’s long haul. For instance, couples benefit from shared goals and activities, which will help pull them along a shared life path, Schwartz said.

“You’re not going to get to 40 years by gazing into each other’s eyes,” Schwartz said. “I think the fact that we’ve worked on things together has woven us together more, in good ways.”

Maintain curiosity about your partner

Also important is retaining a genuine sense of curiosity about your partner, fostered both by time apart to have separate experiences, and by time together, just as a couple, to share those experiences. Schwartz cited a study by Robert Waldinger, clinical professor of psychiatry at MGH and HMS, in which couples watched videos of themselves arguing. Afterwards, each person was asked what the partner was thinking. The longer they had been together, the worse they actually were at guessing, in part because they thought they already knew.

“What keeps love alive is being able to recognize that you don’t really know your partner perfectly and still being curious and still be exploring,” Schwartz said. “Which means, in addition to being sure you have enough time and involvement with each other — that that time isn’t stolen — making sure you have enough separateness that you can be an object of curiosity for the other person.”

Sippin on some rum cocktails

Effect of rom-coms on real-life dating

Ways to reduce plastic use as a family

Is snacking in India becoming too expensive?