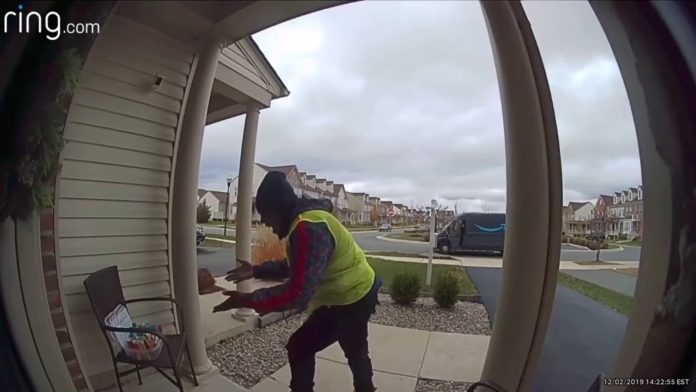 Wilmington, DE-An Amazon delivery staff member’s amazement and celebratory jig after finding food and drinks outside a house in Wilmington in Delaware has gone viral, viewed over 12 million times on Facebook.

The woman at whose house the man was set to deliver the package had left the treat for them, in an expression of thanks for what all they had to endure to do their jobs. The netizens praised both – the woman for her good deed and the Amazon staffer for his response to a stranger’s large-heartedness.

Karim Ahmad-Reed’s dance outside the main door at Kathy Ouma’s home last week was captured on the ring doorbell camera, Yahoo Lifestyle reported. In the video posted by Ouma on Monday, Ahmad-Reed can be seen putting the Amazon package outside her home’s front door before moving on to look at a basket placed nearby.

“Oh, this is nice,” he’s heard exclaiming, as he leans over to see the goodies – soda, water, crackers, and cookies “meant for those delivering holiday packages. “Wow! Oh, this is sweet.” As he walks away after helping himself with the eatables, the man does an impromptu celebratory jig.

“This was the first delivery I’ve seen with snacks at the door for drivers,” he told Yahoo Lifestyle. “I forgot my lunch that day and was hungry and a little dehydrated.”

Ouma posted a picture of the basket and wrote to UPS, USPS, Amazon, and FedEx: “Please take some goodies to enjoy on your route. Thank you for making holiday shopping easy.” Ahmad-Reed said he was in touch with Ouma.

“She’s a jewel and a great human being. I am grateful to have brought her some happiness, as she has to me,” he said. “The world needs more love.” (IANS)