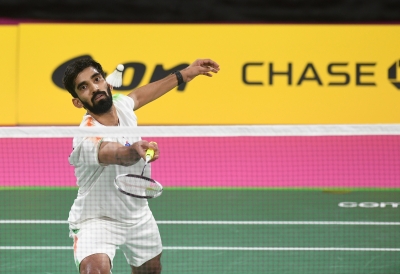 Birmingham– Though it was only their first match and the opponent too was not so strong, the Indian thinktank pushed in some heavy artillery in the form of World Championship silver medallist Kidambi Srikanth and two-time Olympic medallist P.V Sindhu in their opening match of the Mixed Team competition against Pakistan here on Friday.

India are the defending champion in the Mixed Team competition and also the most successful team in the 2018 edition of the Games in Gold Coast, Australia. Both Srikanth and Sindhu had won silver medals in men’s singles and women’s singles respectively.

Pakistan players had not crossed the Round of 32. There is also a huge ranking disparity between players from the two countries.

But the coaches apparently wanted the Indian heavyweight to have some early match practice and put in both Sindhu and Srikanth besides the top doubles pair of Satwiksairaj Rankireddy and Chirag Shetty.

India eventually outplayed Pakistan 3-0, handing the minnows a comprehensive defeat without even breaking a sweat.

The mixed doubles pair of B Sumeeth Reddy and Ashwini Ponappa set the ball rolling for India as it defeated Mohammad Irfan Saeed Bhatti and Ghazala Siddique of Pakistan 21-8, 21-12 in straight games.

Srikanth then stepped into the court at the NEC Hall No 5 to get the better of Murad Ali, playing in his second successive Commonwealth Games, a 21-7, 21-12 defeat. World No 7 P.V Sindhu then sealed victory for India as she defeated Mahoor Shahzad 21-7, 216 in double quick time.

Senior player Srikanth was happy with his performance though he said he was initially a bit tense as he was playing his first match here.

“n such big games it’s always important to start off well, and I’m just really happy with the win. Physically I’m good, it’s just about playing well and implementing it on court,” he said.

“I am playing my first match here at the Commonwealth Games, so I was a little tense. There always will be pressure moments. But yeah, it’s always good to start off with a win. Just very happy with the way things went, it was just about being consistent and maintaining pace,” Srikanth said after his match.

Asked whether considering the rankings and recent results of the Indian players, would he consider missing out on a gold in Birmingham as a disappointment for the entire team, Srikanth said they are doing their best and not considering such things.

“We are not really thinking about the negative sides of it, what if we lose in the semifinal or final of whatever at any position? We want to really give it our best and not think about the results,” he said.

On the tough competition here in the individual events, particularly men’s singles, Srikanth said, “Look at the individual event in the men’s singles, all of the three main medal winners of the world championships are here. Loh Kean Yew (Singapore) won gold, I won silver and Lakshya Sen, who won bronze, is here. So it’s definitely going to be a good one, an interesting one for sure. It’s just about playing well,” he added. (IANS)