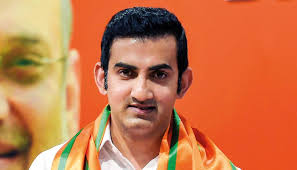 New Delhi–With an annual income of over Rs 12 crore, cricketer-turned-politican Gautam Gambhir is among the richest of all the candidates in fray for the Lok Sabha election in Delhi.

Gambhir, who was nominated by the BJP in East Delhi against AAP’s Atishi, has shown an income of over Rs 12.4 crore in the income tax returns filed for 2017-18.

In Delhi North West, BJP’s singer-turned politician Hans Raj Hans has an annual income of Rs 9.28 lakh, as per the IT returns filed in 2017-18.

His Congress counterpart, Rajesh Lilothia had an annual income of Rs 26.34 lakh, as per the IT returns filed in 2017-18.

Congress candidate from South Delhi Vijender Singh has declared an annual income of Rs 45 lakh in 2017-18. He also declared movable and immovable assets worth Rs 3.57 crore and Rs 5.05 crore respectively.

BJP’s sitting MP and candidate from South Delhi Ramesh Bidhuri has movable and immovable assets worth Rs 18 crore, an increase of close to Rs 3.5 crore in the last five years, according to his affidavit.

According to the affidavit filed by Dikshit, the 81-year-old Congress leader has an apartment in Nizamuddin area which has a market value of around Rs 1.88 crore.

Congress leader and New Delhi candidate Ajay Maken has declared an annual income of over Rs 26.38 lakh, as per the IT returns filed in 2017-18. (IANS)