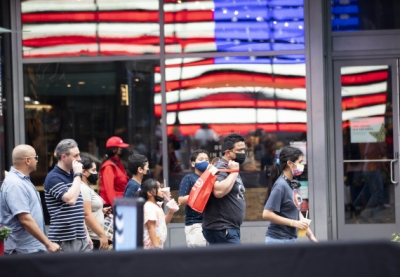 Washington– The Covid-19 pandemic has disproportionately affected people of colour in the US, a new poll has revealed.

The survey, conducted by US market analytics company The Harris Poll, revealed that nearly one in four Latina women in the US have reported losing a family member to the coronavirus, reports Xinhua news agency.

Meanwhile, Latina women were at least 5 per cent more likely to get infected or have a family member who contracts Covid-19 than other women of colour, according to the poll.

Nearly 80 per cent of Latina women have reported feeling personally affected by the pandemic, whether they underwent falling ill, losing a family member, unemployment or eviction.

At least 37 per cent of Latina women also reported facing mental health difficulties amid the pandemic, as compared to 29 per cent of Black women and 34 per cent of Asian American and Pacific Islander women.

The poll was conducted from April 7 to May 16 with 1,617 US adult women who self-identify as Black or African American; of Hispanic, Latina, or Spanish-speaking background; or Asian American Pacific Islander, or of any ethnicity/national origin recognised in the Asian race by the US Census Bureau.

The survey comes after more than a year of statistics showing that people of colour have been disproportionately affected by the coronavirus pandemic.

According to July data from the Centers for Disease Control and Prevention (CDC), Black and Hispanic people are now hospitalised at 2.8 times the rate as white people and contract the virus at least 1.1 times the rate.

Additionally, vaccination rates across the country have frequently been lower among people of colour than white individuals since the rollout first began in December 2020.

By comparison, over 58 per cent of white people in the US are at least partially vaccinated against the virus. (IANS)