New Delhi–The two most significant arguments that noted commentator on international affairs, Meghnad Desai, makes in his latest book are that the year 2016 witnessed the collapse of the Liberal Order — liberty, freedom and free trade, among others — and that there are a lot of similarities between Prime Minister Narendra Modi and the US President Donald Trump.

Titled “Politicshock: Trump, Modi, Brexit and the Prospect for Liberal Democracy”, (Rupa Publications/ Rs595/ 200 Pages) the book analyses Trump and Modi and other “outsiders” who have come to the fore not as “freaks but as results of systematic forces” — economic, social, political and cultural — who will now shape the critical destiny of the time that we live in. 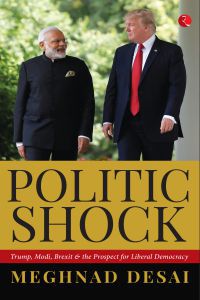 “Liberal Order reached its fullness in 1991 with the collapse of the Soviet Union. It is obviously a Western dream, a North Atlantic philosophy but some sort of freedom was realised. By and large, people coming together and agreeing on major things and only differing on minor things is what defined the liberal order. That is what got threatened in 2016 through its numerous surprises,” Desai told IANS in an interview before listing a series of events, particularly Brexit and the victory of Donald Trump.

He also said that Brexit was much more than just a referendum. It was something in which the “outsiders” came and won against the liberal elite. “These outsiders,” he elaborated, “were always there but the mainstream media failed to recognise their potential and misunderstood the appeal of things like Brexit to them.”

But what makes Liberal Order so significant to the contemporary times?

“My book also examines whether the Liberal Order was as good as it claims to be. It also explores the reasons why it is threatened. Since 1991, human rights are being asserted, things like transgender identities, gay rights and other similar things are being honoured. Of course, equality has not been achieved, but at least in our language and behaviour we are expected to respect diverse identities as equals. That is the fundamental idea of Liberal Order,” Desai, a Labour Peer in the British House of Lords, elaborated.

A significant chunk of the book has been dedicated to chronicling the life, decisions and prospects of two contemporary leaders — Trump and Modi. Desai argues that there is a lot in common between them but yet they are two totally different people.

The major connecting link between the two is “the brutality with which they were greeted by the mainstream media” when they entered the race for the highest seats in their respective countries, he added.

“I could see the parallel between the fact that the media was almost unanimously trashing down Donald Trump and Modi faced the same sort of things when he started off his Lok Sabha campaign. We forget how vicious the media was in 2013 to Mr Modi. He was called a fascist and compared to Hitler. It is a very parallel comparison because there you have a very successful businessman, a very adept television producer, a publicist. Why didn’t the people recognise that the way his campaign was carried out was sufficiently planned?” he asked.

Desai maintained that they are both outsiders in the sense that “all the well-spoken people were against them” while they had an appeal among the masses. He, however, agreed that on the personal level they are “two different people” with “very different” lifestyles.

But despite all the similarities that have been drawn between the two leaders, why has India not been able to strike major trade dealss with the US under Trump?

“The President of the United States is a very powerful person. He can push the nuclear button but he cannot make Congress change its mind on trade policies. America has a very strict separation of powers. On most occasions, it is Congress that takes the call on trade relations. India-US trade negotiations will highly depend on the US Congress agreeing with Trump. Secondly, these are early days to reach a conclusion,” he contended.

In this perceptive book, Desai, a recipient of the Padma Bhushan, India’s third-highest civilian honour, also analyses Asia’s challenge to Western hegemony and asks if the conventional wisdom about the hegemony of free trade liberalism needs re-examination. (IANS)