Mohandas Karamchand Gandhi was born on October 2, 1869, in Gujarat’s Porbandar town to Putlibai and Karamchand Gandhi. His birthday is also observed as the International Day of Non-Violence.

Gandhi was assassinated on January 30, 1948, by Nathuram Godse, a Hindu nationalist during a prayer meeting at the Birla House in New Delhi. Gandhi is admired across the world for his nonviolent philosophy of passive resistance. He was known to his many followers as the Mahatma. 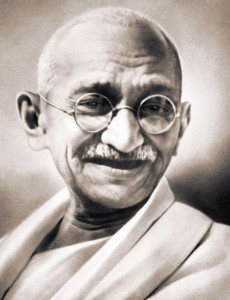 Shekhar Kapur?: He did not ask to be worshipped. Nor his portrait on a wall. He taught us simplicity brotherhood and non materialism. And we failed #Gandhi

Kamal Haasan?: First they ignore you then they laugh at you then they fight you and then you win- Gandhi ji. His words impart strength we need now

Shaan: Today being Gandhi Jayanti and Birthday of Shastri ji, makes it the perfect day to #GiftHappiness! Share someone’s pain…spare a smile..

Kabir Bedi: Saluting the memory of Bapu ji, who defeated an empire with the power of peaceful #Satyagraha. #MahatmaGandhi #GandhiJayanti

Anil Kapoor: Remembering the personal sacrifices and the national legacy of the man who laid down his life for our country…#GandhiJayanti #GandhiMyFather

Anupam Kher: Two great leaders who impacted my life in different ways were born today. My hand folded Pranams to #GandhiJi and #LalBahadurShastriJi.

Anushka Sharma: His greatness was and is about understanding this and speaking it out to millions. May you all find that greatness in you. Happy #GandhiJayanti

Kailash Kher: Non-violence is the weapon of the strong. Mahatma Gandhi another super significance #InternationalNonviolenceDay

Nimrat Kaur: I object to violence because when it appears to do good, the good is only temporary; the evil it does is permanent: #GandhiForever

Juhi Chawla: When you make the change, the world around you automatically starts changing!.

Ajay Devgn: There couldn’t be a more apt way to celebrate #GandhiJayanti than to mark it as Rashtriya Swachhta Divas.

Ritesh Sidhwani: Today is a day to pay tribute to an exceptional leader. Remembering Gandhiji on his 148th birth anniversary. #GandhiJayanti

Raveena Tandon: We hope, we pray, to continue the legacy you left for us , against all odds. Jai Hind !

Riteish Deshmukh: Humble tribute to the father of our nation. His core values are as relevant today as they were during our freedom struggle. #GandhiJayanti

Shreya Ghoshal: Remembering Gandhiji on his 148th birth anniversary #GandhiJayanti May his principles guide us through our lives across all generations

Saiyami Kher: The father of our nation propagated truth and non-violence. It would bring real ‘acche din’ if we all followed his philosophy.(IANS)