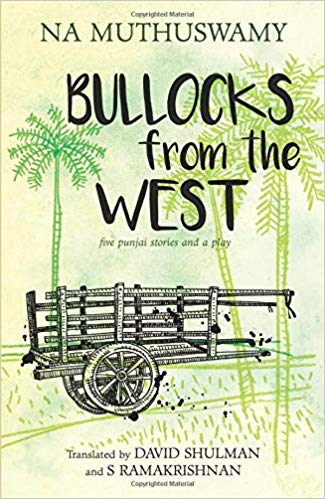 If you are living a life in urban India, which passes like a blur each time you open your eyes, the stories in N.A Muthuswamy’s “Bullocks from the West” are representative of an invaluable pause.

A pause which transports the reader back to a life where beasts still share the human burden and prized bullocks are to farmers what Ferraris perhaps are to stock brokers today.

The short story “Bullocks from the West”, from which the book borrows its name, is just one slice of village life, which Muthuswamy captures with his rich description, laced with mystical regional lore.

The story deals with the ambition of a young boy who is in a tearing hurry to tame and train a pair of bullocks and how his hurry leads to a series of events that eventually lead to the beasts being finally sold off.

Another dramatic story, “Panchali”, is a commentary as well as an evocative tale of a village devdasi — a woman offered to a temple and often driven to “socially sanctioned” prostitution — who plays the role of Panchali as part of a popular village ritual.

The story examines the now-outlawed devdasi custom, which was a common practice in Southern states, in the context of a temple procession which goes out of control.

Factual nuggets — like how the date for the ritual where the devdasi is expected to perform was fixed after ascertaining when she was due for her monthly periods — makes for fascinating reading as well as underlines the quality of observation and research conducted by the writer.

The menstrual period is significant because Panchali was undergoing this when she was ordered to present herself to the gambling arena where the Pandavas had already “lost” her to Duryodhana.

Then, there’s the story of Ramayya Padayachi, an old man who believes he is a great general of the Chola king of Kadarankondan and refuses to come to terms with the real world, as it plays out around him.

The solitary play “England”, which accompanies the five stories, is a stinging critique of the social inequities, which did not cease to be despite the independence of India, while also capturing the sum of resistance to British rule.

Set in the hinterland of Tamil Nadu, the book makes the lives in the back of beyond of the South Indian state come alive with liberal use of regional phrases, metaphors and vivid descriptions of the human as well as the natural landscape of these villages.

“Bullocks from the West” has been translated by David Shulman one of the foremost authorities in Indian languages, and S. Ramakrishnan, a publishing editor. And it would take a special team of translators to retain the inherent charm and layered enigma, as well as retain the ultra-regional flourish, which life in a village really is about. (IANS)