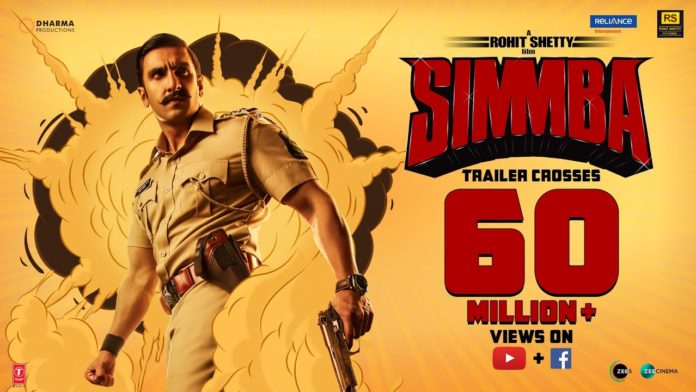 As far as getting a kick out of the movie-viewing experience is concerned, there is nothing like a larger-than-life over-the-top drama on social awakening.

“Simmba” is a kick in the groin for all rapists, and potential rapists. I doubt rape will decline after this film. But at least those who think of violating women would blush a bit.

The second-to-last sequence of this loud but effective anti-rape/ anti-corruption film shows Simmba Ranveer Singh sitting in the courtroom with his mentor Singham Ajay Devgan. The two khaki-clad praise-vardi vigilantes come to one decisive conclusion: cops need to put the fear of God and Law into rapists before this heinous crime winds its way out of the male libido.

Until then, there are the encounters of the cops kind. This film makes a disturbing case for bumping off legally-absolved rapists, and at one point Sara Ali Khan who plays the daughter of a “shaheed” encounter cop tells her beloved Simmba, “If you need tips on encounter killing you can come to me.” As though giving her boyfriend tips on dating decorum.

Sara, by the way, has nothing much to do in this tale with a bleeding heart about crimes against women. A bit ironical, no? Simmba would laugh uproariously first and then ask what irony means. As played by the adrenaline-thumping ball of energy Ranveer Singh, Simmba is initially a bit of a clown cloaked in khaki. Well, actually he doesn’t put on the cop’s uniform until midpoint when his corrupt nature undergoes a dramatic volte-face.

That the reformation of Simmba is so convincing and absorbing is entirely due to Ranveer Singh’s arresting take on a cop who conforms to corruption until the push becomes a shove. And the jokey mood of decadent grafting converts into a fight to the finish to eradicate evil.

It is an over-familiar cinematic terrain and therefore a sticky wicket for the Ranveer-Rohit Shetty duo to traverse. That they succeed in putting a renewed vigour to the old rape-and-revenge formula is more attributable to the combined conviction of the director and the actor than the writing which clearly relies on formulaic signposts and of course, witty one-liners and comebacks, to the redemptive climax.

Strangely for a Rohit Shetty film, the fights seem tackily staged. The most vital action sequence where Singham meets Simmba is one painful stretched-out fistfight with the two heroes looking a little lost in the goons’ world.

Still, and I say this with much relief, “Simmba” is Rohit Shetty’s most relevant film to date.

And when Ranveer evoked the “Nirbhaya” case in a dramtic courtroom scene I was on the verge of getting goosemps. Ranveer’s “Simmba” is a crazily amoral character with a core of goodness waiting to surface. He finds his moral bearings on a compass that is all his own. He moves to his own rhythm and fights personal political and social battles on his own terms.

Not surprisingly, Simmba’s relationship with a veteran cop (played with brilliant sang-froid by Ashutosh Rana) who remains stubbornly idealistic in a world gone to the dogs, is far more fluently fleshed out than his relationship with his girl. The awkwardness in courtship, I suspect, is not just in the hero’s character but an ingrained part of director Rohit Shetty’s creative DNA. Shetty is far more comfortable in the world of boys, cars and guns than in the delicate realm of girl’s romance and roses (roses reminds me, when “Simmba” presents his girl with a bouquet he quips he picked it up fresh from a grave).

The romantic song shot to the sound of a remixed version of a Nusrat Fateh Ali Khan number is the only awkward digression in a film that knows its beat and follows it without apology or the fear of defeat.

In one elaborate song and dance, traditional Maharashtrian women are seen riding into the over-saturated frame on mobikes wearing sunglasses. This is the crazy world of Gol Maal which has suddenly woken up to the newspaper headlines. It wants to show a deep respect for women but can’t help chuckling at its own stab at topicality. (IANS)