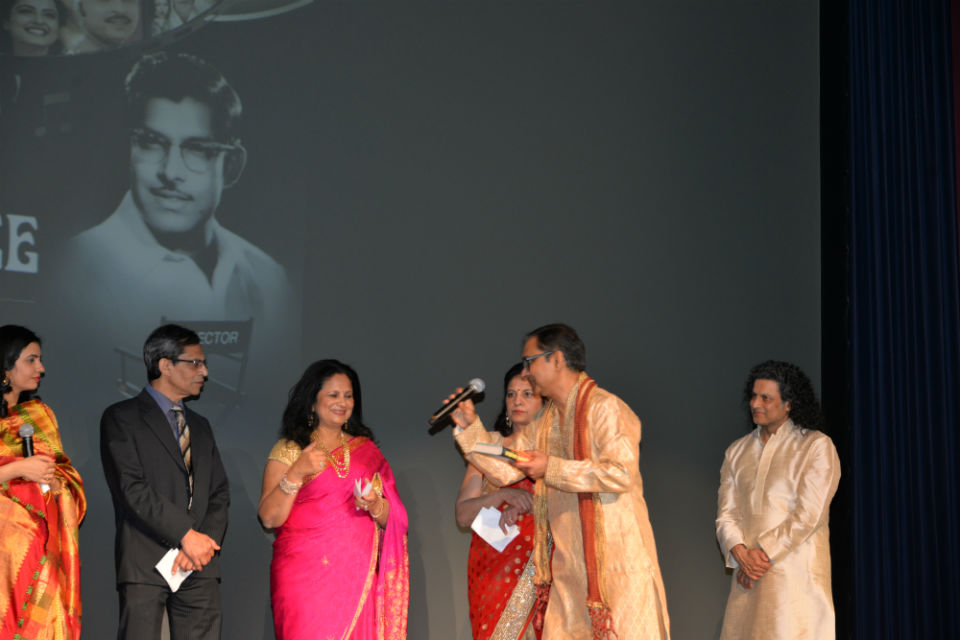 LEXINGTON, MA—Bostonians on Saturday paid a tribute to legendary Bollywood director Hrishikesh Mukherjee in style. With his son and daughter-in-law, Swati and Pratip Mukherjee present in the audience, the show brought lovely music and songs from movies directed by Mukherjee, popularly know as Hrishi da.

The show was produced by the husband-and-wife team of Mohan and Meera Subramaniam.

“It was a great musical tribute to one of the greatest directors of Indian Cinema,” said Mohan Subramaniam, whose show was sold out a month ahead of the musical program. “Hrishikesh Mukherjee did not just make great movies, his movies also brought immortal music to millions of people.” 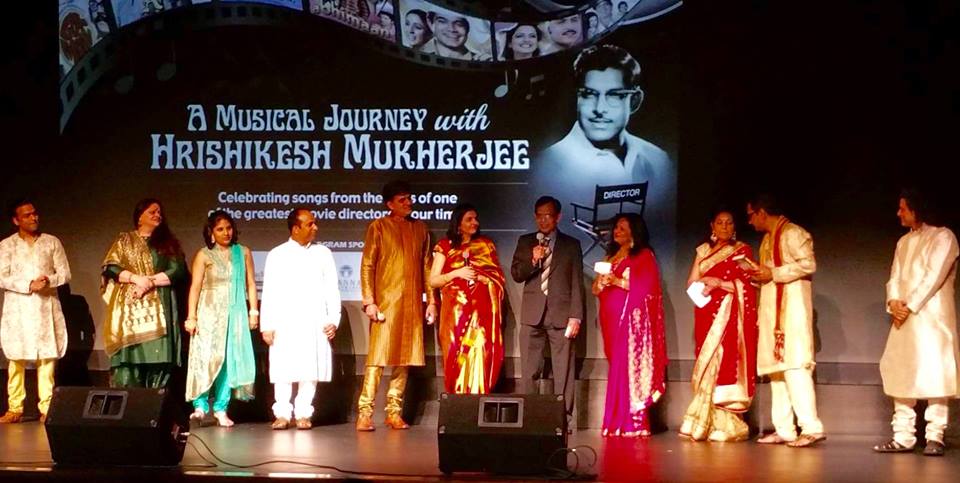 Ajay Sinha, an Art History Professor at Mount Holyoke College, introduced the show with his own unique perspective of Mukherjee’s contributions to Hindi films.

“Hrishi Da’s most original contribution to middle class cinema is the way he humanized the technologies of film and mass media. In Guddi, he shows us the material conditions of the film industry not simply to divest us of our fascination with cinema, but to turn a cultural taboo into a love affair,” Sinha told the jam-packed auditorium at National Heritage Museum in Lexington, MA. “In Aashirwad, a radio triggers intense longing when a father, in prison, hears his daughter, now a playback singer, singing a song he had taught her as a child. Most shockingly, in Anand, a doctor confronts overwhelming loss when a tape recorder suddenly starts up, bringing the dead friend back to life momentarily, as a haunted presence.”

Subramaniams, along with co-producers Swati and Pratip Mukherjeeand their team of singers brought some lovely melodies to the people of New England. The audiovisuals in the background depicting choice clips for his movies took the sudience down an emotional memory lane. Through these clips and some delectable songs, Subramaniam delivered a story line that kept the audience mesmerized right from the beginning to the end.

Singers of the evening were Subramaniam, Sowmya Sri, Raghu Saranathan, Nidhi Tare Lad and Valentino Almeida. Each brought with them their unique textures of their voices and skills. Preetesh Shreevastava provided comic interludes in his own inimitable style.

“We want to particularly thank Amol Palekar ji who at the request of Swati Mukherjee generously shared his memories of his close relationships with Hrishi da,” said Subramaniam. “The interview clips that we aired in the program gave a unique and close perspective of that great man. Starting with Golmaal Amol ji acted in five films with Hrishi da. Golmaal of course was a sensational hit.”

This program was special as the choice of film clips from Hrishi da’s movies and the selected songs made a profound emotional connection with the audience. Funds raised during the evening will be donated to a charity to prevent the needless killing of dogs.

“Hrishi da would have been pleased to know that his work is still being appreciated – and hopefully inspires ongoing generations to make a positive, progressive impact with their own art,” said the daughter-in-law Mukherjee. “He would be equally – if not more happy – to know that the funds being raised today will go to prevent the needless killing of dogs. Though others found it eccentric, Baba’s love for dogs was deeper than any other person I’ve ever met – and it has been inherited by all in the Mukherjee family. We couldn’t be more grateful to see that this fun-filled night is impacting such a meaningful cause.”

“It has been a marathon effort – no easy task by any means. And it has meant so much to our family – helping us connect with our own memories and the people that were brought into our lives through Baba,” said Mukherjee.