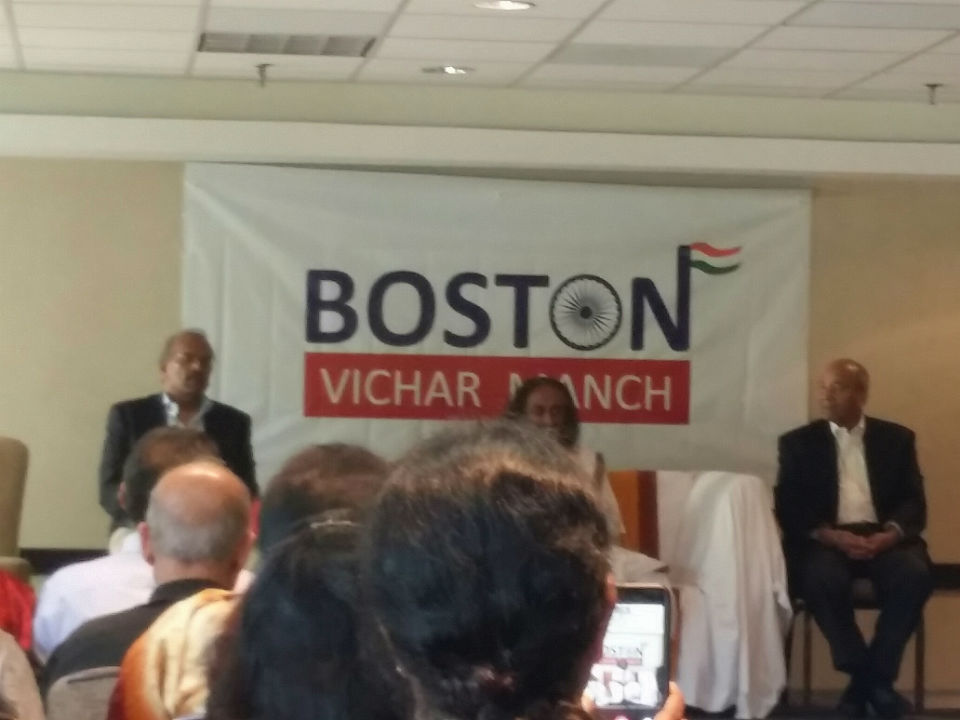 CAMBRIDGE, MA– Boston Vichar Manch, an intellectual movement for betterment of society, is on a roll. On Sunday, Manch hosted spiritual Guru Sri Sri Ravi Shankar in Cambridge, MA, and in September the organization is brining Indian Foreign Minister Sushma Swaraj to Boston.

The meeting with Sri Sri Ravi Shankar was attended by about 50 people and it was only by invitation. Ashwani Garg, one of the organizers of BVM and a volunteer with Sewa International , welcomed the guests and said that BVM invites prominent and distinguished and person of significance as guest and engages him or her in an intelligent conversation with a stellar audience.

During his speech, Sri Sri Ravi Shankar called on the audience to promote Hindu values but more in a scientific way and with an open mind.

Yogesh Rathi felicitated Sri Sri Ravi Shankar with a bouquet of flowers. Mukesh Chatter, an innovator and entrepreneur, conducted a question-and-answer session between Sri Sri Ravi Shankar and the audience. Chatter and his wife Priti run a foundation that is establishing a Center of Excellence at Rensselaer Polytechnic Institute (RPI) to research and develop innovative products to improve the quality of life in rural areas globally.

Prof. Ved  P. Nanda, John Evans Distinguished University Professor and Thompson G. Marsh Professor of Law at the University of Denver, also spoke at the event and set the tone for discussion. He is author of 24 books. Professor Nanda holds leadership positions in the global international law community, including the World Jurist Association, American Society of International Law, International Law Association, American Law Institute, etc.   He is the Chair of the Uberoi Foundation for Religious Studies.  Prof. Nanda also serves as the President of Hindu Swayamsewak Sangh for the America zone. Saumitra Gokhale, the Global Coordinator of Hindu Swayamsevak Sangh, was also in the audience along with Boston chapter volunteer Yogesh Rathi, who is an Associate Professor in the Harvard Medical School in the department of psychiatry and radiology.

BVM’s theme is a message from Rig Veda:  Aa No Bhadrah Kratavo Yantu Vishwatah  (Let noble thoughts come to us from all over the world.)