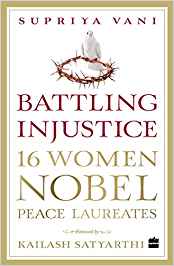 Bengaluru–It was in 1905 that the first Nobel Prize for Peace was won by a woman, Bertha von Suttner. Since then, there have been 15 others who have been awarded the Nobel Peace prize for their efforts. In a multitude of cultural settings from different countries and situations, all the women had one aspect in common — fighting injustice.

Looking at each of the women through a cultural and political lens, Vani brings out facets of these women one wouldn’t otherwise know.

“It was indeed a herculean task. It needed grit and determination and, above all, tenacity of purpose to pursue all living 10 women Nobel peace laureates and convince them about my earnestness to further the cause of world peace,” Vani told IANS in an interview.

Meeting the women was both inspiring and ennobling, said Vani, who is also a member of the advisory board of The Hague Justice Portal.

She also had to visit the International Court of Justice and many international libraries to gather information about the six peace prize winners who are no longer alive.

“One need not gather all the details. One only needs to know the intrinsic values which they cherished in their lives which need to be made known to others,” Vani elaborated.

The author also shared in the book personal letters written by these women to their families during challenging periods, their thoughts as teenagers and how grit was a common denominator she could draw among all the 16 women.

“Fathoming the guts of these women to fight injustice has been at the core of my entire research effort. I have not penned abridged biographies of these eminent women, but dovetailed all such events in their life which show the purity of their mind and empathy,” Vani said.

“Barring Mother Teresa, who achieved sainthood by virtue of her selfless service to the suffering humanity, all others were peace activists who battled myriad vicissitudes in their social and political lives and succeeded in their mission,” the writer stated.

Meeting women like these is a special experience, Vani believes. “Meeting Suu Kyi, Shirin Ebadi, Leymah Gbowee, Malala and her parents was a pilgrimage of a sort. All of them are very special to me,” she said.

“The only part which is stressing me now is the silence of Aung San Suu Kyi about the genocide of Rohingya Muslims in Burma (Myanmar),” Vani admitted.

There has been much criticism of Suu Kyi, with many across the world asking for her Nobel Peace prize to be taken away amidst her silence when thousands of Rohingya Muslims from Myanmar are being forced to flee the country. (Close to 400,000 have fled since August 25 alone when the army launched a crackdown.)

But each of the women peace laureates she met had left an “indelible mark on my psyche”, Vani said.

“Some of them took personal interest and conveyed to me that I am taking forward the cause which they are close to, for which they have been bestowed the Nobel Peace prize,” the writer added. (IANS)

Ensure Oz territory is not used for anti-India activities: India to...