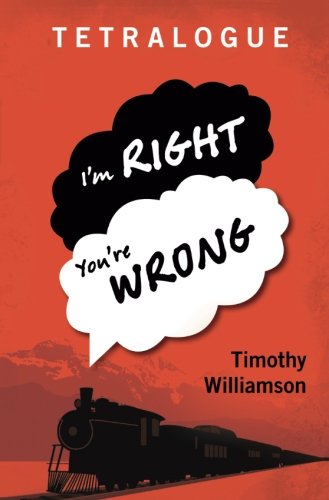 It is all in our mind. How we live our lives depends, to a considerable extent, on the philosophical points of view we use to explain the world and guide our actions. But how can we find out the strengths and weaknesses of the various views? Easy, hop on to this metaphorical train of thought.

In what may first seem a four-act play but is actually an ancient and effective way of questioning our assertions and their underlying presumptions — the Socratic method — British philosopher Timothy Williamson makes his characters personifications of four prominent viewpoints and sets them to debate each other,

In the four sections titled “The Perils of Peacemaking”, “The Terrors of Truth”, “The Advantages of Arrogance” and “The Vices of Value”, Williamson, the Wykeham Professor of Logic at Oxford University, has his characters discuss issues ranging from whether witchcraft exists, were the moon landings faked and if it is wrong for parents to raise their hand on children and more.

Sarah, boarding her train, is dismayed to see it is overcrowded and thinks of sending a complaint seeking the operator use a scientific method of estimating the passenger load. As she finds a seat, she runs into an acquaintance, Bob and is surprised to see his leg in a cast.

Learning he broke his leg when a part of wall fell on him as he was gardening, she calls it an accident but Bob believes the cause is darker — he suspects the old woman, who is his next-door neighbour and has never liked him, is a witch and had used a curse.

Sarah, who has immense faith in science, immediately contests his claim and they enter quite a spirited argument. The two, representing a scientific mindset and a superstition-inclined traditionalist, are unable to convince each other and it is then a co-passenger intervenes.

But Zac, who seeks to reconcile matters as he points out that both are taking a “superior attitude of ‘I’m right and you are wrong'”, finds how tough the issue is when both Sarah and Bob immediately use the same dialogue at each other — with full conviction.

Representing a sort of relativism/post-modern outlook, he is also drawn into the debate, which now becomes triangular, and also frequently comes under attack from both sides.

The debate ascends to a new level altogether when Roxana, who enters the scene at the beginning of the second part but only joins the conversation rather abruptly later as it focuses on what is true and false, tells Sarah that she doesn’t seem to know much about logic.

As Sarah snipes she doesn’t seem to know much about manners, Roxana, signalling her own mindset, tells her logic will be more vital to understand truth and falsity. The cool, collected and somewhat formal logician also joins the debate but rather infrequently and when she does, she can easily demolish the other’s arguments.

Though the characters may seem like exaggerated caricatures (especially Bob, who many will dislike for his rather unique but unshakeable beliefs but evokes some pity, while Zac can be viewed as evil or at least meddlesome and anxious-to-please), they fulfill their objectives of representing each position at its most undiluted so as to give as a clear idea of what it is all about and how it works.

And while the symposium, which has moved on to wider ones like distinguishing between right and wrong (both knowledge-wise and morally), what is true and false and knowledge vs belief, draws to an end without any of the participants changing their views — though some (Sarah especially) have developed a more nuanced view.

As will any diligent, open-minded reader at this innovative and incisive discourse on different paths to “truth” . (IANS)