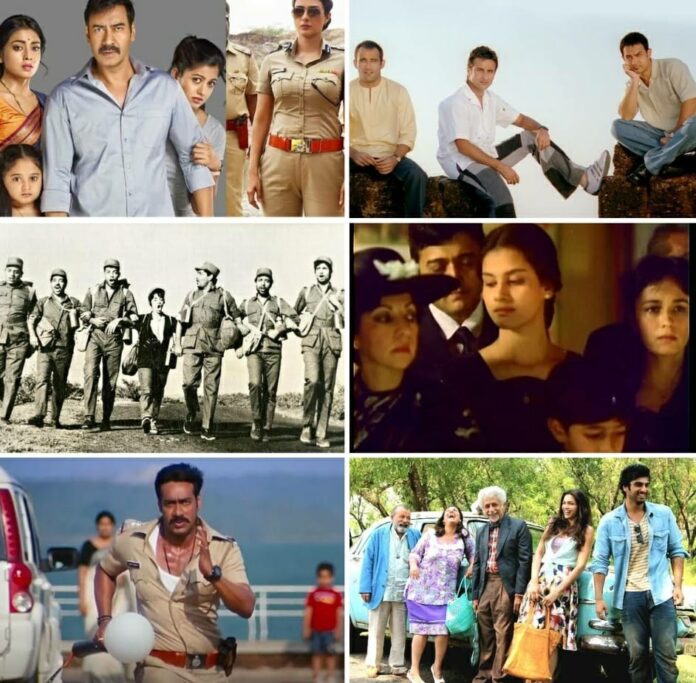 Mumbai– In the popular imagination, ‘Bobby’ was the original ‘Goan’ film, but it was filmed everywhere but Goa — from Gulmarg to Raj Kapoor’s farmhouse on the Pune-Solapur highway.

The low-budget film (Big B reportedly was paid a lordly sum of Rs 5,000 for it!) was about six Indians from different parts of the country who joined a Goan freedom fighter and roused nationalist sentiments in the colony by hoisting the Indian Tricolour on Portuguese forts and police stations. Loosely based on ‘For Whom the Bell Tolls’ (1943), the film was directed by the writer-auteur Khwaja Ahmed Abbas, who, incidentally, wrote ‘Bobby’ and a number of other Raj Kapoor movies.

Utpal Dutt, the Malayalam cinema veteran Madhu, A.K. Hangal and Jalal Agha played the lead roles in ‘Saat Hindustani’, but it didn’t quite set the box-office registers ringing. It did, however, pick up a couple of awards, including the National Awards for Most Promising Newcomer for the Big B, who, in the film, famously declares under a Portuguese soldier’s bayonet, “Hum Hindustani rengte nahin hain” (“We Indians don’t crawl”).

Goa’s liberation struggle forms the central narrative of the yet another Bollywood film (‘Pukar’, 1983), starring Bachchan in the lead role along with Randhir Kapoor, Zeenat Aman, Prem Chopra (who plays another Goan, Jack Braganza, in ‘Bobby’) and Tina Munim, but, again, it struggled in the box-office. And it was shot in Daman and Diu.

Now a no-brainer film shoot location, Goa made its first substantive appearance in a Bollywood movie in the superhit road film ‘Bombay to Goa’ (1972), another Bachchan-starrer, where the lead role was played by the comedian Mehmood.

A remake of the 1966 Tamil film, ‘Madras to Pondicherry’, it was shot in Goa and neighbouring Belgaum (Belgavi) in Karnataka, apart from studios in Chennai.

In a blog post, Bachchan said the fight scene in it with Shatrughan Sinha got him his iconic role in Prakash Mehra’s 1973 film ‘Zanjeer’. He also remembered how the film’s crew had to struggle to make him get his dance steps right, especially for his famous ‘Dekha Na Hai Re’ number with Aruna Irani.

Since then, Goa, which is now also the permanent venue of the International Film Festival of India (IFFI), has featured regularly in Hindi cinema, from Shyam Benegal’s Trikal (1985), which was shot in the late cartoonist Mario Miranda’s ancestral home in Loutolim, to most famously Rohit Shetty’s laugh-a-minute ‘Golmaal’ series (2006-10), Singham (2011) and Drishyam (2015).

Here’s our pick of just some of the memorable Bollywood films which have been filmed in locations across Goa:

Ek Duje Ke Liye (1981): Scenes of South-North love story starring Kamal Haasan-Rati Agnihotri were shot at the old Patto bridge, Dona Paula jetty, Shantadurga temple and Hervalem waterfalls, according to a listing in Goa’s ‘Herald’ newspaper. Kamal Haasan was cast in yet another Goa-themed film, ‘Saagar’ (1985) by Ramesh Sippy, which also featured the older ‘Bobby’ duo, Rishi Kapoor and Dimple Kapadia, who was returning to films after marriage.

Kabhi Haan Kabhi Nahin (1994): One of Shah Rukh Khan’s most memorable movies directed by Kundan Shah, it was filmed at Colva beach, Fort Aguada and the ruins of St Augustine.

Khamoshi – The Musical (1996): Sanjay Leela Bhansali’s debut film with Nana Patekar, Seema Biswas and Manisha Koirala was shot in parts at Anjuna, Old Goa and the Saligao church. Bhansali’s 2011 film ‘Guzaarish’, where Hrithik Roshan plays a famous magician crippled by an accident, is also a visual ode to Goa.

Golmaal Series (2006-17): The four films of this series revolving around the comic capers of four friends infamously getting into trouble, played by Ajay Devgn, Tusshar Kapoor, Arshad Warsi and Shreyas Talpade (Sharman Joshi in the first film), have been shot mainly at Panjim, Dona Paula and Fort Aguada. And Goa, we’re told, will feature yet again (along with Devgn) in Shetty’s fifth ‘Golmaal’ film — ‘Phir Golmaal’ (scheduled for a December 2023 release).

Singham (2011): Rohit Shetty’s cop drama is another Goa-centric film, which is still remembered for the action sequence where Bajirao Singham (Ajay Devgn) beats up the villain Jaikant Shikre’s goons at Dona Paula Jetty. It turned the location into a major tourist attraction. Another Shetty-Devgn collaboration, the 2015 action film ‘Drishyam’, also had Goa as its backdrop, notably Panaji, the state capital.

Dum Maaro Dum (2011): Rohan Sippy’s crime drama may not have been commercial success, but it is remembered for its shots of the crowded Arpora market as it is.

Finding Fanny (2014): Directed by Homi Adjania, the film, starring Naseeruddin Shah, Dimple Kapadia, Deepika Padukone and Arjun Kapoor, moves away from popular locations and explores the lesser-known Parra, Cortalim, Aldona, Assagao, Saligao and Socorro as it follows five dysfunctional friends who set out on a road trip in search of Fanny, the love interest of the character played by Shah.

Dear Zindagi (2016): The film with a young Alia Bhatt and Shah Rukh Khan is set against stunning backdrops, such as the Parra road flanked on both sides by coconut trees, the village Salvador do Mundo in Bardez, which is much visited for its eponymous 16th-century church, whose Portuguese name means ‘Saviour of the World’) and Morjim beach. (IANS)