Mumbai– ‘Arjun Reddy’ actress Shalini Pandey, who is all set to make her Bollywood debut in the Ranveer Singh starrer ‘Jayeshbhai Jordaar’, says she has been crazily looking forward for the film’s release for more than a year now.

Shalini, who turns a year older on Thursday, said: “I’ve been crazily looking forward to the release for more than a year now and I can’t wait for audiences to see the film.

“I know it’s a good film and I also know it’s a very special film which we have made with so much love and dedication.”

For Shalini, the experience of working in this film has been emotional as it is her first Hindi film debut.

She said: “I can’t wait for the film to release because I know people are going to love the film and the characters.

“Also, I can’t wait for theatres to open, because I want people to go to theatres, even I want to go back to theatres and watch the film there on the big screen as this film has its own journey, and I want people to experience it as soon as possible. I literally can’t wait, it’s so special and I get excited every time when I think about the film releasing.”

Jackie Shroff says he picked up ‘Beedu’ lingo from Big B

Mumbai– Actor Jackie Shroff shares that he picked up his signature ‘Beedu’ catchphrase from one of the films of Amitabh Bachchan, on the ‘Shaadaar Shukravaar’ episode of ‘Kaun Banega Crorepati 13’. Bollywood actors Jackie Shroff and Suniel Shetty will be the special guests on the show.

In the show, host Amitabh Bachchan asks where Jackie Shroff gets his ‘Beedu’ accent from. Answering his question, Jackie shares: “Sir, firstly my area was such that the language that was spoken was this only. You have given us this (Beedu) language. You’ve taught us a good way to speak too. But, this ‘Mumbai-ki-bhasha'(language of Mumbai) that we speak, that also you’ve only given us. There was one dialogue also of you Sir from ‘Amar Akbar Anthony’.”

Jackie Shroff and Suneil Shetty will be playing ‘Kaun Banega Crorepati’ for the causes that they believe in and support.

Mumbai– Bollywood actor Chunky Pandey, who is the father of young actress Ananya Pandey, shares how Ananya, just like her mother, does not have cooking skills but instead cooks up stories! Chunky also shares more family secrets from the Pandey household.

Chunky was present along with Ananya for a special episode of the show ‘Star vs Food S2’.

Ananya took the challenge of making an elaborate high tea spread under the guidance of Chef Freny Fernandes, Owner & Pastry Chef at Moner, in Mumbai. She attempted a French savoury dish ‘Gougere’ and dessert ‘Macaroons’, two extremely intricate and difficult dishes considering Chef Freny does not accept anything other than perfection going out of her kitchen.

Sharing some funny anecdotes, Chunky said, “She and her mother have never cooked anything for me, but Ananya has cooked up some nice stories and told me, but never food.”

Chunky reminisces a food memory from when he went to wife Bhavana’s house for dinner before their wedding, “See Ananya, I don’t blame you if you’ve gone slightly wrong because it’s a hereditary problem, in our family no one knows how to cook I mean especially from the mother’s side no one knows how to cook (laughs) but let me tell you an incident around our marriage.

“Bhavana is a Delhi girl, and I was invited to their house for dinner…beautiful butter chicken, Chinese everything was served and I ‘dabo-ed dabo-ed’ and ate and all and then Bhavana’s mom tells me… Nani (For Ananya) tells me ‘ke Bhavana ne sab kuch banaye hai’ and then I went to the kitchen to check, and I saw all these dabbas from different restaurants. I swear I said yes immediately. Then on the third day of our wedding night at home the cook had run away and then I told Bhavana why don’t you cook and she made butter chicken … and it was RAW.”

Mumbai– Actress Juhi Chawla has revealed about an incident when superstar Shah Rukh Khan arrived at her party at 2.30 in the morning! 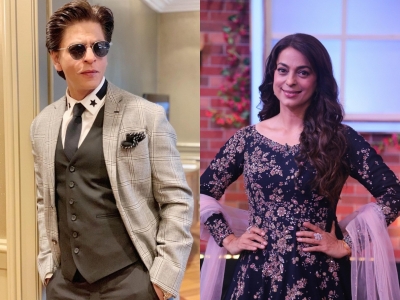 Juhi revealed this on the sets of ‘Zee Comedy Show’ where she will feature as a special guest this weekend.

“Whenever there is a party at our house, we always invite Shah Rukh Khan. During one party, I had called him, and everyone was excited that he was coming, especially my staff because they wanted to take pictures with him,” Juhi said.

“I had told him to come by 11 pm, but he had mentioned that he would come slightly late. Eventually he came around 2.30 am, by the time which the staff had left and I had slept. The food was also over, everyone had gone home and that’s when he came,” the actress recalled.

Commenting on Shah Rukh Khan’s habit of arriving late, the show’s ‘Laughing Buddha’ Farah Khan shared: “We all know that when we have a 9 am call time, Shah Rukh will come at 2 pm, but that’s fine. However, when he suddenly comes in at 11 am, things go for a toss. ‘Sab gadbad ho jata hai’ and we have to then change things around.”

Offering Shah Rukh a funny piece of advice, Farah added: “I feel late aa rahe ho, toh consistently late aao. (If you are coming late , then be consistent with it.)”