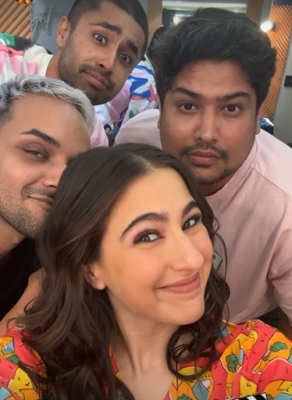 As she starts her first shoot of 2023, Sara Ali Khan shares team boomerang

Mumbai– Bollywood actress Sara Ali Khan, who has been busy with her multiple shoot schedules, recently posed with her team as she kickstarted shoot for the year 2023, after wrapping up 3 films in 2022, and starting the prep for the Anurag Basu directorial ‘Metro…Inn Dino’.

Taking to the story section of her Instagram on Friday, the ‘Atrangi Re’ actress shared a boomerang from the sets of her ongoing project as she wrapped up the shoot. While expressing her excitement to shoot her first shoot of the year. She wrote on the video: “First day of shoot in 2023.”

In her selfie with her team, Sara Ali Khan can be seen dressed in comfortable clothing before she started shooting. She is reportedly shooting for the biopic of Usha Mehta – ‘Ae Watan Mere Watan’.

On the work front, Sara will be next seen in ‘Gaslight’ opposite Vikrant Massey, Maddock’s next opposite Vicky Kaushal and ‘Ae Watan Mere Watan’.

New Delhi– Adaa Khan, who has been playing the role of Shesha in ‘Naagin’ series and reprised her role in the 6th season also, said that every year, her look as Shesha changes and she loves being part of the show. 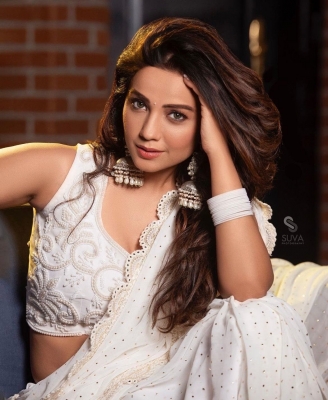 She shared: “Every season, they (the makers) change the look. It’s not the same. It’s always a different outfit, different makeup, different hair, everything is different and all the fans wait that if Shesha comes, what will be her look this time? And they observe everything, from the jewellery to the clothes, to makeup and everything else. So everyone is really happy that this time Shesha has come back as positive. People are very happy to see our chemistry and are also comparing it with Mouni Roy”.

Adaa is often remembered for her roles in ‘Behenein’, ‘Amrit Manthan’, ‘Naagin’, ‘Vish Ya Amrit: Sitara’. In 2020, she also participated in ‘Fear Factor: Khatron Ke Khiladi 10’.

She added further: “I am always happy when they call me for any season. It feels like you are back home because this is your own baby, at the end of the day. I was part of season one and it started with me. So, when I come in another season, I enjoy it. I enjoy playing Shesha and I am sure the audience will also love watching Shesha.”

Her look is something that she is always very excited about, says Adaa, adding: “Before I could enter, we just chose an outfit and spoke about how it would be different. What will the jewellery be like? So of course, there are inputs. The creative, the stylists, we all discuss and that’s how the look comes together.”

Recently, Adaa, ran a poll on Shesha’s dialogue in ‘Naagin’ and received such great comments. Talking about the same, she said: “It reached almost 5000 comments and people remembered all of Shesha’s dialogues. Like from Season 1 till now. They remember everything! They have written paragraphs and it’s so overwhelming when they remember all your lines, your dialogues. I could only pin 3 comments. I wish I could pin more because there are so many beautiful comments. The way they have remembered the lines, they know the dialogues, they know the famous dialogues of Shesha.”

Mumbai– Bollywood actor John Abraham, who will be soon seen as an antagonist in the upcoming spy-thriller film ‘Pathaan’, has shared that the whole world is waiting for Shah Rukh Khan’s return to the silver screen. The film is SRK’s first in four years with his last release being the ambitious Aanand L. Rai directorial, ‘Zero’. 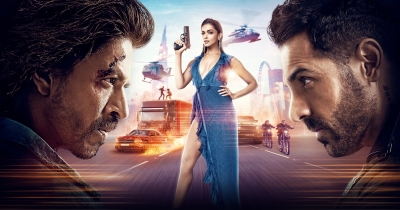 In a video released by the makers of ‘Pathaan’, John said, “I don’t think just the entire nation, I think the entire world wants to see Shah Rukh Khan on screen, including myself, and I think he more than delivered the goods because he’s fantastic in this film.”

John plays the arch-enemy of SRK in the movie and he is relishing that this film is bringing back the old John Abraham from ‘Dhoom’, a film that made him achieve cult status among audiences with his bad boy on bike image.

Talking about his character in the film, John shared, “Jim is cool. Jim is dangerous and Jim brings back the old John Abraham from Dhoom! I totally love the action sequences of ‘Pathaan’ because most of them are mobile.”

He added, “One sequence was of course on motorcycles in the snow, one was on a truck so again we were moving, the third is in the air which is wow, fantastic. So, each one was in movement and they were fantastic.

‘Pathaan’, a YRF production which also stars Deepika Padukone as an agent, is set to hit the screens on January 25 in Hindi, Tamil and Telugu.

Priyanka Chopra responds to criticism of her use of surrogate

Los Angeles– ‘Quantico’ actress Priyanka Chopra Jonas is addressing criticism of her use of a surrogate. The actress, 40, shared with ‘British Vogue’ her journey to motherhood and life as a mom to daughter Malti Marie, who celebrated her first birthday earlier this week. 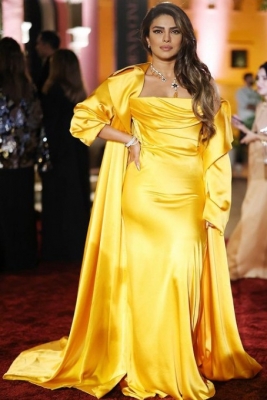 Malti’s birth was announced in a joint statement from Chopra Jonas and husband Nick Jonas, shared on their respective social media accounts, reports ‘People’ magazine. The news that their baby girl was born via surrogate was met with commentary and criticism that was hard for the new mom.

“I’ve developed a tough hide when people talk about me,” she told ‘British Vogue’. “But it’s so painful when they talk about my daughter. I’m like, ‘Keep her out of it.'”

“I know what it felt like to hold her little hands when they were trying to find her veins,” she continued, referencing the fact that Malti was born three months premature. “So no, she’s not going to be a gossip. I’ve been really protective of this chapter of my life with my daughter. Because it’s not about my life only. It’s hers too.”

As per ‘People’, Chopra Jonas went on to confirm that her use of a surrogate was medically necessary.

“I had medical complications,” she explained. “This was a necessary step, and I’m so grateful I was in a position where I could do this. Our surrogate was so generous, kind, lovely and funny, and she took care of this precious gift for us for six months.”

Noting that critics are unlikely to change their minds about her, Chopra Jonas levelled, “You don’t know me. You don’t know what I’ve been through. And just because I don’t want to make my medical history, or my daughter’s, public doesn’t give you the right to make up whatever the reasons were”. (IANS)