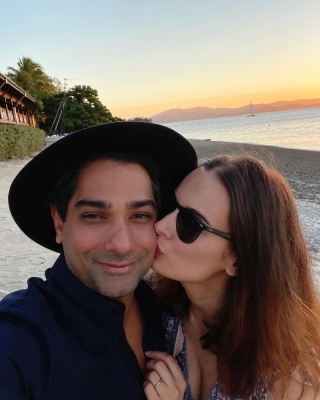 New Delhi– Actress Evelyn Sharma on Wednesday posted a set of snapshots from her honeymoon on social media.

“Forever honeymooning with you,” wrote Evelyn, with a sparkling heart emoji.

Evelyn and her husband Tushaan Bhindi are currently on their honeymoon, although the actress has refrained from specifying where they are holidaying.

The photo caption with her new set of pictures seems an extension of the one-word description she wrote with pictures of her wedding ceremony.

“Forever,” she had written with pictures of her wedding, posted earlier in June.

Alaya gets her first Covid jab: ‘Wasn’t bad at all!’

In the video, Alaya is scared of the shot to begin with. The nurse and mecidal staff assure her it would be fine and ask her to “just relax”. Once the shot is given, Alaya is surprised that she did not feel a thing.

As the nurse tells her that the vaccination has been done, she seems pleasantly relieved.

“Oh really?! Oh, thank you, that was so great! That wasn’t bad at all!” she exclaims.

Earlier this year, the 23-year-old actress was seen in the music video of Goldie Sohel’s song “Aaj sajeya”.

Nia posted a picture on Instagram where she is seen in a red-and-white chequered mid-length dress with a thigh high slit and plunging neckline.

She completed her look with minimum make-up and chose to keep her hair straight for the look.

“This is my CANDY CANE look!” she declared in the caption.

Nia was recently seen in the song “Tum bewafa ho” alongside also features Arjun Bijlani and Soumya Joshi. Sung by Payal Dev and Stebin Ben, and with music by Payal Dev, the number has lyrics by Kunaal Vermaa.

She was recently seen in season two of the web series “Jamai 2.0”, along with Ravi Dubey and Achint Kaur. The actress rose to fame with shows such as “Kaali: Ek Agnipariksha”, “Ek Hazaaron Mein Meri Behna Hai” and “Jamai Raja”.

Tisca Chopra: Trip to parents’ home is a visit into one’s childhood

Mumbai–  Tisca Chopra shared a nostalgic post on Wednesday after a trip to her parents’ home, recalling the lotus stem prepared by her mother as magical.

“Love and Lotus Stems A trip to the parents home is a visit into one’s childhood .. Familiar bartans, old bedsheets (that have now become kitchen rags) and of course the passage of one’s own life scattered over their walls proudly .. pictures of my graduation, my first magazine cover, a poster of an of a forgotten film.. But what causes my heart to dance is how mothers will always be mothers .. they want to feed you, slogging away in the kitchen wanting to share their secret recipes, that never turn out the same,” she wrote in an Instagram post.

“All mums believe that any troubles you may have will vanish by consuming their haath ka khaana .. and somehow, they do vanish .. because adult troubles fade as you become a kid again, get pampered again..
Anyway, I’ve always believed my mum’s Lotus Stems are magical..” the actress-author-filmmaker added.

She asked netizens about their favourite item prepared by mom. She wrote: “What does your mum make doe you that never tastes the same anywhere else? Do share in the comments below..”

Sunny Leone is in the mood to reflect on change

Mumbai– Sunny Leone had a few words of wisdom in her Wednesday post on social media.

An Instagram photo she posted captures Sunny in close-up, sporting a no make-up look. She has a faraway look in the eyes.

The actress is currently seen hosting the youth-based reality show “Splitsvilla” with Rannvijay Singha on television. It has been shot in Kerala.

Her other upcoming roster includes the psychological thriller “Shero” and the thriller series “Anamika”. Sunny also has a role in the period drama “The Battle Of Bheema Koregaon”.

Mumbai– Actress Janhvi Kapoor makes quite a splash with a new set of bikini pictures she posted on Wednesday.

Janhvi wears a white and leopard print bikini in the photograph she posted o n Instagram. She does not reveal details of the shoot or vacation where it was clicked.

“Maybe half the beauty of every blurred sunset is that it is fleeting,” she wrote as caption.

Janhvi will next be seen in “Dostana 2” and “Good Luck Jerry” .(IANS)