New Delhi–Celebrated photographer Atul Kasbekar is happy with the pressure coming in after his successful foray into film production with “Neerja”. He says he now wants to spread happiness and joy with his upcoming projects. 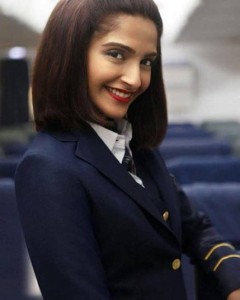 Kasbekar’s debut production venture “Neerja” told a powerful real life story of Neerja Bhanot, an airhostess who lost her life while saving others on a hijacked plane.

“We are working on ‘Tumhari Sulu’. It goes on floors in April and we are hoping to release it in December. Apart from that, we are working on seven or eight scripts. But I am happy about the pressure,” Kasbekar told IANS over phone from Mumbai.

Kasbekar, who has photographed models for Kingfisher Calendar 2017, shared that after the success of the film, he sat with the team and did some introspection.

He said: “‘Tumhari Sulu’ is an urban comedy… We thought that the last time we made people cry, now we will send everyone back laughing. I didn’t even know what to say when people came up to me and said ‘What a lovely film it was’ or told me how much they cried. I didn’t know whether to say ‘yes’ or should I say, ‘Oh, I am sorry that you cried’. I want people to come out and be happy.”

Actress Vidya Balan will be seen as a radio jockey (RJ) named Sulochana, fondly known as Sulu, in “Tumhari Sulu”, which is co-produced by T-Series. It will be directed by Suresh Triveni.

My fashion sense was quite outrageous: Kangana Ranaut

New Delhi–Kangana Ranaut is known for her film projects as well as her fashion sense. The actress says it was not a “conscious leap” to come forward as a style icon.

The actress also said she has been experimental with her looks since her growing up days.

“I started as a small town girl and it was not a conscious leap where I decided that ‘Okay fine, I have to emerge as this style icon’. While growing up, I was quite experimental with my looks. It was not like that I didn’t stand out back home in my little village where I grew up,” Kangana told IANS.

“In fact, my fashion sense was quite outrageous. I remember wearing torn shorts and straw hat and going to market, which sort of scandalised everyone,” she added.

The 29-year-old is known for films like “Gangster – A Love Story”, “Fashion”, “Queen”, “Tanu Weds Manu” and “Tanu Weds Manu Returns”. She is now being lauded for her look in her forthcoming film “Rangoon” — Vishal Bhardwaj’s period drama set in the 1940s amidst the turmoil of India’s Independence struggle.

After “Rangoon”, she will be seen in “Rani Lakshmi Bai” and “Simran”.

Mumbai–Amitabh Bachchan made his debut in Hollywood with 2003 film “The Great Gatsby”, but he is not heading to the West anytime soon. The megastar says he has no offers from the foreign shores at the moment.

Many Indian actors like Priyanka Chopra, Deepika Padukone, Irrfan Khan and Nimrat Kaur are crossing borders, and making a mark in Hollywood.

Ask Big B about this, and he says he has no plans to venture out to the foreign shores.

“There are no projects that have come my way, so the answer is no,” Amitabh told IANS over an email from Mumbai.

Last year, Amitabh got critical acclaim with “Pink”, a movie about issues that women face. The actor says he believes “that the reward for me in my film ‘Pink’ is really a reward for the issue that ‘Pink’ so impressively depicted.”

Mumbai–Luv Sinha feels he has not carried forward the legacy of his father and actor-politician Shatrughan Sinha in the right manner due to lack of correct opportunities. He says he needs this year to be the one where he makes all the right moves.

Calling his journey in showbiz difficult, Luv looked back at his starry ambitions when his father was honoured with the Lifetime Achievement Award at Filmfare on Saturday night. He said he loves acting, and his passion for it will keep on growing no matter how many times he stumbles.

Luv posted on Facebook: “My father received the Jio Filmfare lifetime achievement award last night. It was his first Filmfare award, but also the most important one.

“Being his son means having to carry forward a legacy. It also means having to fight to achieve my dreams on my own. At times I may feel that I never received the correct opportunity to prove myself while others may have, but that isn’t an excuse to hold myself back in any way.

“I hope that in the end it will all be worth it because I know I’ve paid my dues, and I need this year to be the one where I take a step in the right direction.”

The actor made his film debut with “Sadiyaan” (2010), which received a lukewarm response at the box office.

He added: “I’ve always loved acting and the film industry even though it’s been a difficult journey, and will always love it no matter what, and nights like yesterday only help to make my love for it stronger.”

Mumbai–Actress Sonam Kapoor says winning the Best Actress award for “Neerja” is special and that she will cherish the moment forever.

Sonam won the Critics’ Award For Best Actor (Female) for her performance in “Neerja” at the 62nd Jio Filmfare Awards here on Saturday night.

Directed by Ram Madhvani and produced by Fox Star Studios and Bling Unplugged, “Neerja” featured Sonam in the lead. She essayed the late valiant flight attendant Neerja Bhanot, who lost her life while saving others on a hijacked Pan Am plane a Karachi.

Sonam tweeted: “Winning the best actress award for ‘Neerja’, was a truly special moment… But it was made more special because Aanand L Rai gave it to me… love you sir. Thank you Filmfare. I’ll forever cherish this moment.”

Actress Athiya Shetty also congratulated Sonam with a tweet: “Congratulations to the kindest one, Sonam Kapoor. Nobody could have played Neerja with such honesty and love. Shine on.”

Filmmaker Satish Kaushik said that Sonam deserved it, while Rajkummar Rao said: “Heartiest congratulations Sonam. Many more to come. More power to you. Very happy for you.”

Actor Manoj Bajpayee’s victory as the Best Actor (Male) at Filmfare Awards for “Aligarh” is a huge achievement for the LGBTQ community, says the movie’s co-writer Apurva Asrani, who had “lost faith in awards”.

“I had lost faith in awards. But Manoj Bajpayee winning a mainstream award for playing a gay protagonist is huge for India’s LGBTQ! Aligarh,” Asrani tweeted on Sunday.

To that, Manoj, who shared the award with Shahid Kapoor (“Udta Punjab”), tweeted: “It’s all due to your writing and Hansal Mehta.”

Veteran filmmaker Mahesh Bhatt congratulated his ‘little big girl’ Alia Bhatt for her big win at the Filmfare Awards, and gave her some words of wisdom.

Alia won the Filmfare Best Actor Award (Female) for her performance as a Bihari immigrant in “Udta Punjab”. The 62nd Jio Filmfare Awards was held here on Saturday night.

Her sister Pooja Bhatt also lauded her skills as an actor, and said that it is the “beginning of many more to come”.

“Bravo gorgeous, brave one! This Alia is the beginning of many more to come,” tweeted the actor-filmmaker Pooja.

Besides her family, Alia’s colleagues also congratulated her fo the big win.

Actress Athiya Shetty posted: “Congratulations to this bundle of talent Alia! Every time I see her perform, I message her saying ‘But how?!’. May there be many more.”

Her “Udta Punjab” co-star Shahid Kapoor, who won the Best Actor (Male) award, also said that she deserved the award.