Mumbai–Actress Lara Dutta says that former cricket player Mohammad Azharuddin, on whose life the film “Azhar” is based, is a phenomenal person. 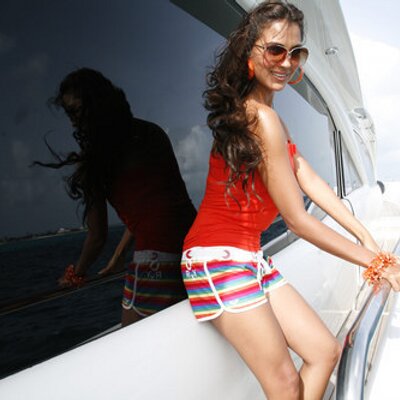 “He (Azharuddin) has tremendously lent his support to the film and has obviously remained very involved. He’s an incredible person. Having worked with him over this year, I got to know him. He’s quite a phenomenal person,” said Lara, who presented Fair & Lovely Foundation scholarships to 200 women here. Like the trailer suggests, Azharuddin was one of the most successful and most controversial cricket captains of the country because of his accomplishments on the cricket field, match-fixing allegations and relationships.

Lara plays a lawyer in “Azhar”, who is hell bent on proving the match-fixing allegations levelled against Azharuddin (played by Emraan Hashmi) in the film. “The film is releasing and it feels good. People’s reactions to the trailer have been very good. I’m excited after having worked very hard in the film. It’s a slightly big responsibility as well because it is based on real-life incidences. Hope people go and watch it and like it,” she said.

Asked if she anticipates any problem for the film from the Board Of Control for Cricket In India (BCCI), the national governing body for cricket in India, Lara replied in negative, saying “the filmmakers have done a good research on it”. “They have made the film with a lot of care and thought. The film will have a destiny and we’ll see what the destiny is when the film releases,” she added.

Considering she wants Emraan behind bars in the film, will she also stop him from doing his trademark kissing scenes? “I haven’t stopped him. Like I said at the trailer launch, I was saved (from kisses),” Lara quipped.

Would love to work with Shahrukh, Salman: Balki

Mumbai–Writer-director R. Balki, who has worked with megastar Amitabh Bachchan in all his four films, says he would love to work with Shahrukh and Salman Khan provided he gets the correct idea for them.

“Who does not want to work with them (Khans)? But there’s no point in me working with them unless I really get an idea, then I chase them and ask them if they want to do it,” he added. Balki’s wife Gauri Shinde, after her debut venture “English Vinglish”, is presently busy working on her next film which stars Shahrukh Khan and Alia Bhatt.

Balki said that his wife wishes him to become “at least 10 percent” of the characters he presents in his films, like Kabir from his latest film “Ki & Ka”. “Gauri always says, ‘I wish that you could at least become 10 percent of the characters that you write. Why can’t you be like Kabir? Or like others?’ I always tell her that if I would become my characters, then why would I write them. I’ll always write what I am not. I never write what’s there in life, but what I want to become in life.”

“Like we think, this is how a man or a woman should be, every writer has qualities of both male and female. So whatever he/she wishes, they write that, not what they really are, but what they want to be,” said the director of “Ki & Ka”.

Balki is always known for his unusual stories, like a househusband in “Ki & Ka”, a father playing a son to his real-life son in “Paa”, a love story between man and a woman, half his age in “Cheeni Kum” and a mute man talking with the help of innovative technology in “Shamitabh”.

Megastar Amitabh Bachchan featured in all of his films, with a cameo in “Ki & Ka”.

Mumbai–Telugu actor Sudheer Babu, who makes his Hindi film debut with “Baaghi”, says that he got inspired by his co-star Tiger Shroff’s work ethic while working on the film.

“Tiger gets inspired seeing me in the film, but in real life I’ve got inspired seeing him. Fighting is not about hitting each other, it’s also like dancing; you need to get the timing correct,” Sudheer said, at his ‘special unveiling’ for media.

“He always made sure he doesn’t hit the opposite person.. for me I hit him once, but he was very calm and he didn’t even complain about it. I was the one who stopped the shot and said ‘sorry’, but he didn’t stop the shot,” he said.

“Tiger is one bundle of energy, before the shoot or after the shoot, he used to work out. Even during the shoot he is doing some movement, some dance move or some kick he’ll be practicing. I used to feel that the only time he’s resting is while he’s sleeping,” the actor added.  Sudheer is the brother-in-law of Telugu superstar Mahesh Babu and had made his debut as a full-fledged hero with “Siva Manasulo Sruthi” in 2012.

About getting slotted in the “villain” bracket? “I wanted to be recognized as a very good actor, that’s my first priority, and I’ve seen that there is a lot of scope for performance in the character I play.”

“Baaghi” is directed by Sabbir Khan and releases on April 29.

Mumbai–Actress Shriya Saran, who will soon be seen opposite Nana Patekar in actor Prakash Raj’s directorial “Tadka”, says it is a sweet love story.

“I have a film with Nana Patekar. Prakash Raj, who is a very famous actor, and has won numerous awards, will be directing a Hindi film for the first time, it’s named aTadka’. Its a sweet love story… I’ll be shooting for that in Goa,” Shriya said to a query about her upcoming projects while attending an art exhibition here.

The film is a remake of Malayalam film “Salt N’ Pepper”, and Prakash Raj was the actor and director of the Tamil, Telugu and Kannada versions and also had produced it. The film is also set to feature Taapsee Pannu and Ali Fazal and Nana, who replaces Prakash Raj’s character, will romance Shriya in the film.

At the art exhibition on Lord Krishna, titled “Krishnansh”, she said: “I do Kathak, and if you’re connected with any art form in India, Krishna becomes a part of your existence, and since childhood I have danced on his songs and his bhajans’, and poetry. “There’s something very divine, naughty, very beautiful, beyond words about Krishna. And painting him is very difficult because we have so many impressions about him, and expressing that is difficult. I used to do Krishna-inspired painting till 2-3 years ago… I love painting and love to see art.”