Singapore– Congress President Rahul Gandhi, who is on a three-day foreign trip that will also take him to Malaysia, on Thursday said here that India was facing “very serious dangers of polarising society” and accused the ruling BJP of being “less concerned about peace and tranquility”.

Gandhi met Indian-origin CEOs of companies in Singapore to discuss the situation of jobs, investments and economy in India.

He said Congress saw the society as a system that has to be kept in balance, asserting that he would work for ushering in a “new Congress” after taking over the reigns of the party from his mother Sonia in December. 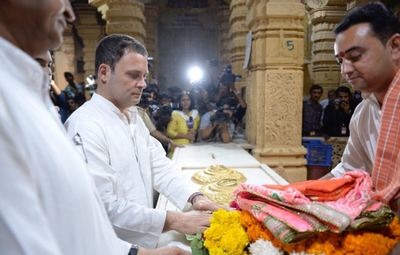 “We see society as a system that has to be kept in balance. The BJP on the other hand is less concerned about peace and tranquility. We see very serious dangers of polarising society and risks arising from them,” he said.

Apparently referring to the alleged 2G spectrum scam in which the BJP had consistently targeted the previous UPA government, Gandhi said the system was destabilised between 2012 and 2014.

A Delhi court in December last year acquitted all those accused of corruption and money laundering charges in the 2G spectrum allocation cases. The allegations were partly blamed for the Congress losing the 2014 Lok Sabha elections.

Gandhi, on a March 8-10 visit to Singapore and Malaysia as part of his outreach to the Indian diaspora, said the Congress had a clean slate and a new opportunity now.

“We faced a storm in 2012. Between 2012 and 2014 the system was destabilised and we saw the consequences. We have a clean slate now, and a new opportunity. We will present you with a new Congress party that envisions the values you were born with,” he said.

The Congress leader said India was seeing the biggest migration of rural people. “We have challenges. Broadly our view is we want a peaceful transition, a transition that carries everybody together.”

Gandhi discussed a range of issues including jobs, investments and the prevalent economic conditions with the Indian-origin CEOs of companies in Singapore.

He also met the CEO of Teamsek Ho Ching and its board and discussed a plethora of issues including quantum computing, robotics, Chinese manufacturing and big data.

Gandhi paid homage to Netaji Subhash Chandra Bose and interacted with the people at the Singapore Indian Association.

Established in 1923, the foundation stone of the association’s clubhouse was laid by India’s first Prime Minister Jawaharlal Nehru in 1950.

Gandhi met members of the Kamala Club at the Singapore Indian Association. Created as an amalgamation of Lotus Club and Ladies Union on the suggestion of Nehru, Kamala Club works on issues of women’s rights and empowerment.

“Over the next three days, I look forward to meeting the Indian community, business leaders and members of the Indian Overseas Congress in Singapore and Malaysia. Also on my schedule are meetings with the Singapore PM, Lee Hsien Loong and the Malaysian PM, Najib Razak,” Gandhi said in a tweet. (IANS)