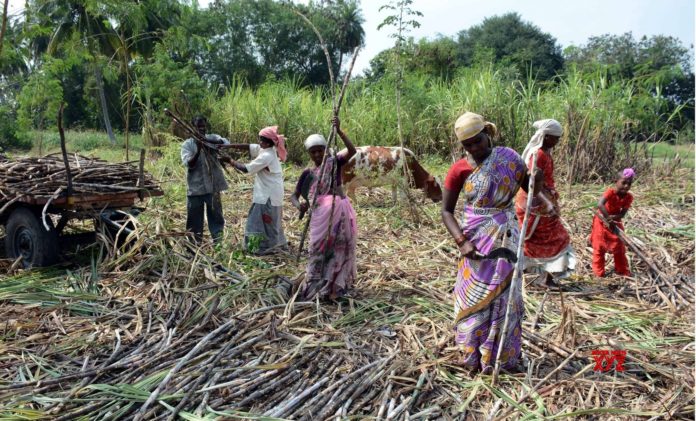 Mumbai– A bitter and shocking truth involving thousands of women sugarcane labourers, engaged by Maharashtra’s thriving sugar industry, has once again come to the fore. Even more shocking is the fact that despite the women suffering for all those years, no action was ever taken.

A large number of these economically backward women — mostly in the 21-40 age group, take the extreme step of getting their uterus removed to stop their four-day menstrual cycle in order to avoid losing their daily wages for those days.

Ruling Maha Vikas Aghadi (MVA)’s Congress Minister for Women and Child Welfare Nitin Raut for the first time has officially acknowledged the plight of the women and has taken up their case in the state cabinet.

“The Honourable CM has informed that some Shiv Sena workers have also apprised him of the serious issue and assured that the MVA government will soon take suitable steps to curb this social menace,” Raut told IANS.

Raut said more than 30,000 women labourers working in the sugarcane farms with their families or relatives, had undergone hysterectomies to protect their daily wages during the four-day period when they cannot work.

He also wrote a letter to the chief minister urging him to direct the concerned departments to take up the problem on a top priority and help resolve the humanitarian issue.

“These painful operations are performed by quacks, road-side surgeons or the village mid-wives (Dai-Maa), either at home or even in unhygienic clinics of medicos with doubtful credentials. This is not only a slur on the dignity of their womanhood, but a gross violation of their human rights,” Raut said sternly.

The minister said: “When the late B. R. Ambedkar — the Architect of Indian Constitution — once saw a woman in advanced stage of pregnancy struggling to work in a Bihar mine, and shocked by her plight, he set rolling what became the first Indian law to give full maternity benefits and protection to women.”

A majority of the women labourers hail from the dry and barren Beed and Osmanabad who migrate annually for six months to toil in the lush and prosperous sugar plantations in western Maharashtra.

“Hired by labour contractors as a ‘package deal’, the entire family, extended family and even other relatives, try to get the best monetary compensation for the half-year employment. But women who don’t work lose average of Rs 400-600 per day for the four-day period, for six months. For them, it’s a big loss,” prominent social worker and author Uttam Kamble told IANS.

Around 80 per cent of the labour hails from the Vanjari community, 10 per cent are Banjaras and the rest belong to mixed groups, he said.

“The late Bharatiya Janata Party Union Minister Gopinath Munde, his ex-minister daughter Pankaja Munde-Palwe and MP daughter Pritam Munde also belong to the Vanjari community. Sadly, they seem to have completely ignored the plight of their own folk,” Kamble added.

On the estimates of women who may have undergone such hysterectomies, he said the 30,000 figure may be understated in absence of any official data, besides those women who may have died during the traumatic procedure, physical and emotional side-effects as they permanently sacrifice their chance of motherhood, etc.

“Though a majority of them are married off in their late teens, and they already have two-three children by their early-twenties, they are goaded by peers, financial pressures and other considerations, to consent for the hysterectomy,” Kamble explained.

Bhumata Ranragini Brigade chief Trupti Desai termed this as “sheer violation of women’s personal honour” in which many conspire to extract narrow gains.

Activists like Trupti Malti and Sheela Waghmare have raised the issue in the past, but it failed to make headway owing to intricate politics involved.

As Raut said, of the 200-odd mills in the around three-fourths are controlled by the MVA allies Nationalist Congress Party ‘sugar barons’, a few by the Congress and remaining by other parties.

After two decades’ research, Kamble’s new book — “Koyta-Varche Kok” (Sickle On The Uterus), will be released on January 15 by a woman sugarcane worker who reluctantly underwent a hysterectomy, at the ironic venue of Shree Datta Shetkari Cooperative Sugar Mill, Shirol in Kolhapur.