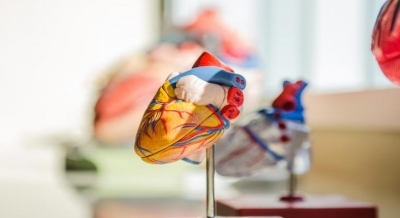 The new JenaValve Trilogy bionic implant, which has a metal frame and a valve from a pig, can be fitted during a minimally invasive procedure that takes less than an hour, Daily Mail reported.

“There’s been nothing like this before,” cardiologist Professor Andreas Baumbach, who led the team pioneering the device at St Bartholomew’s Hospital in London, was quoted as saying.

The tiny device is designed to treat aortic regurgitation — a condition that starves the body of oxygenated blood and leaves patients fatigued and breathless.

The problem occurs when the valve that sits at the exit to the heart, the aortic valve, becomes damaged and fails to close completely. This allows blood to leak backward into the heart and affects its ability to pump efficiently.

It’s most commonly seen in older patients, and those with high blood pressure.

The only option for such patients is open heart surgery, which involves opening up the patient’s chest, putting their heart on a bypass machine and replacing the valve/ However, many sufferers are left too frail to withstand this major surgery, the report said.

“The JenaValve Trilogy will make a huge difference. The first few hundred patients have been treated now and there has been almost a 100 per cent success rate,” Baumbach said.

To implant the JenaValve Trilogy, a small incision is made in the femoral artery in the groin, a fine, flexible tube called a catheter is then inserted into the artery and threaded up through the body and into the heart, with surgeons using an X-ray machine to see, in real-time, what they are doing.

The JenaValve, which is made from a collapsible tube-shaped metal frame, is put into place via the catheter. Initially it is folded up, but once the surgeon confirms it is in the right place, it is opened out, the report said.

Fully expanded, the valve is around an inch in diameter, but the size can be adjusted in-situ to make sure it’s a perfect fit.

Three small legs — ‘a bit like the legs on the lunar landing module’, said Baumbach – lock it into position over the natural aortic valve, and it begins to work straight away.

The catheter is then removed, the incision stitched up and patients are allowed to go home a day or two later, the report said. (IANS)