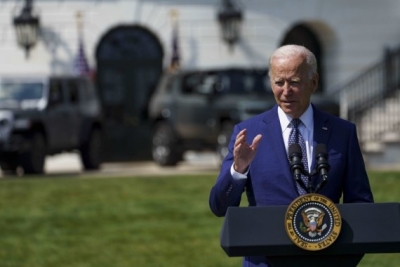 Washington– US President Joe Biden’s plan to ship 500 million free coronavirus tests to Americans was largely lauded, but those who serve the nation’s most vulnerable said the tests should have been distributed more equitably, according to a report in The Washington Post.

An estimated 64 million Americans live in multi-generational households. According to the most recent data available, a disproportionate number are people of colour with many of them working in essential jobs in cities and communities where the pandemic has hit the hardest, Xinhua news agency reported citing the Washington Post report.

Myron Quon, executive director of Pacific Asian Counselling Services, which serves the immigrant community in Los Angeles, said four tests for families in vulnerable communities “is just not sufficient. Not even close.”

The Biden administration said it came up with offering four tests per household by looking at the number of tests first available for distribution and dividing that by the total number of US households, which is around 122 million, according to the report.

Of the more than 900,000 people in the US killed by Covid since the start of the pandemic, Black, Latino and Native Americans represent an oversize share, with death rates 60 to 90 per cent higher than that of White Americans, according to a Washington Post analysis of Covid deaths.(IANS)