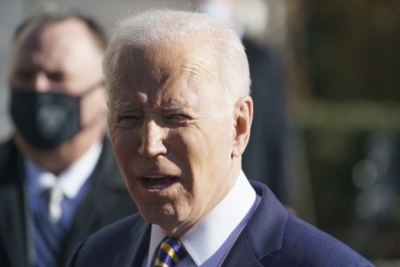 New York– President Biden has said the US was consulting India on the Ukraine crisis but has not completely resolved the issue of being in “sync” on dealing with Russia.

“We are in consultation with India on Thursday, (but) we haven’t resolved that completely,” he added on Thursday at a news conference when asked if India as a major defence partner of the US was fully in sync with Washington on the Russia and Ukraine policy.

The US President unveiled a series of economic and strategic sanctions on Russia at his news conference declaring, “This is going to impose severe cost on the Russian economy, both immediately and over time.”

In retaliation for the Russian invasion of Ukraine ordered by Russia’s President Vladimir Putin early Thursday morning, Biden said the US and its allies would blunt Moscow’s ability to participate in global trade by cutting off its ability to use dollars, euros, pounds and yen.

As Russian forces attacked key sites in Ukraine and its troops entered that country and engaged with Ukrainian forces, he said, “Putin is the aggressor. Putin chose this war. And now he and his country will bear the consequences.”

India is facing a dilemma on how to deal with Russia, its long-standing friend and defence supplier, while its ties with the West are growing and it is getting more tied into the global economic situation.

New Delhi will be tested when a resolution against Russia is introduced in the UN Security Council by the US and its allies, and it will have to take a side.

India abstained on a procedural vote on the agenda proposed by the West at a UN Security Council meeting in January on Ukraine.

India’s Permanent Representative, T.S. Tirumurti warned Wednesday evening at an emergency Security Council meeting, “The situation is in danger of spiralling into a major crisis. We express our deep concern over the developments, which if not handled carefully, may well undermine the peace and security of the region.”

Without naming Russia, he expressed “regret that the calls of the international community to give time to the recent initiatives undertaken by parties to diffuse tensions were not heeded to”.

At his news conference, Biden ruled out sending troops to help the Ukrainians, but said US forces would be going to NATO allies in the East. (IANS)