“We are delighted to announce that Grammy-winning tabla virtuoso Zakir Hussain will perform with the renowned Berklee Indian Ensemble at a historic concert on November 22,” Berklee India Exchange, known as BIX, announced. “Zakir Ji will also receive an honorary doctorate from Berklee College of Music for his immense artistic contributions.” 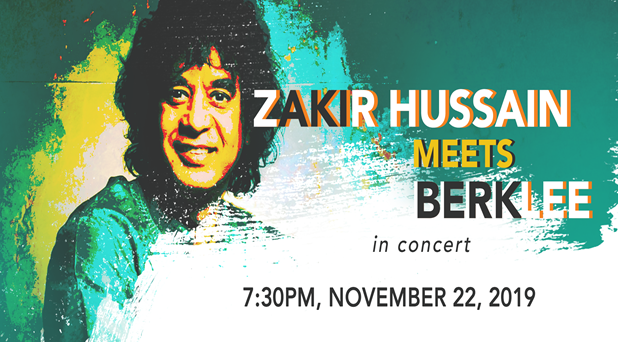 The concert will be held on Friday, November 22, at 7:30 PM at Klarman Hall of the Harvard Business School, located at Soldiers Field Road in Boston.

Produced by Berklee India Exchange, the concert will feature an international cast of musicians performing original material and new interpretations of Hussain’s timeless music, joined by the maestro himself, BIX said.

John McLaughlin, legendary guitarist, bandleader and composer, will join Berklee leadership to confer the honorary degree. All proceeds from this concert will support the Berklee India Exchange and a Zakir Hussain Scholarship at Berklee.

Ustad Zakir Hussain’s consistently brilliant and exciting performances have not only established him as a national treasure in his own country, India, but gained him worldwide fame as a percussionist and international phenomenon.

The recipient of countless honors and awards, Zakir Ji has more than 149 albums to his credit with the top musicians of the global music world, from Chick Corea and Herbie Hancock to Ravi Shankar and Yo-Yo Ma. He continues to bring the tabla and Indian culture to the international stage.

BIX was launched in 2013 as a platform for cultural conversation about Indian music through artist residencies, musical collaborations, tours, workshops and performances. With collaborations featuring A.R. Rahman, Shankar Mahadevan, Clinton Cerejo, Vijay Prakash and Shreya Ghoshal so far, BIX has become an axis point for Indian artists and students to share their music and experience the music of Berklee musicians hailing from more than 105 countries, and vice versa.