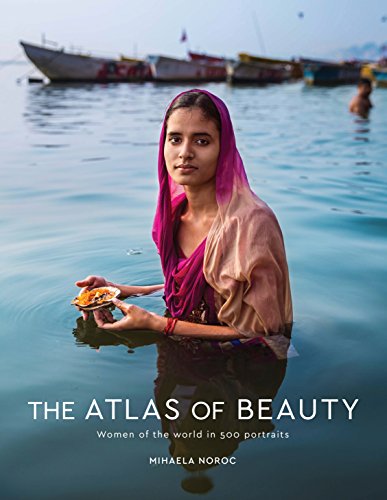 There is an old saying that you should “never judge a book by its cover” and the illustrated book of portraits, painstakingly put together by author Mihaela Noroc, proves this loud and clear.

“The Atlas of Beauty” is a stunning collection of stories and portraits of 500 women from more than 50 countries.

To celebrate women from around the world, Noroc took advantage of her ability to adapt to different environments quickly (growing up, her parents moved often). The images taken are a fruit of her backpacking days, mingling with the locals in villages, cities and cultures.

The women in the portraits hail from different backgrounds and are of different age groups — ranging from a teenager starting life in college to a woman celebrating her 100th birthday.

Some of the stories are motivating, as Noroc was lucky to capture ladies who were braving conservative cultures and judgmental eyes to be who they wanted to be — in her camera lens.

There is a Bulgarian woman with well-defined facial features, sans make-up. She’s rather attractive and could easily pass of as a model, but Noroc reveals she plays for the national ice hockey team.

“Although the sport is expensive and not very popular in her country, she made great sacrifices to follow her dream of playing. She succeeded at the tough sport, and did it without losing her innocent and beautiful smile,” Noroc notes.

Or take Giulia, simple and beautiful, with a few piercings which seem to underline her rebellious nature. But Noroc states Giulia “has felt androgynous — male and female — since she was a child and so, she got her chest tattooed in Greek”.

The story of an old woman in Antigua, Guatemala, reminds you that everyone, even those leading quiet and anonymous lives, want to be remembered. She asked Noroc to send her the images she clicked — she wanted to put them up on her wall so that people would not forget her after she passed away.

There are many inspiring stories here that could prove to be life-changing for some and also give courage to the shackled, who think there is no way out. While an attractive young Brazilian woman is transgender, an Iranian woman featured in the pictorial book went against the religious authorities and embarked on long bicycle tours.

Noroc has also shared instances where some of her subjects needed the permission of their husbands to get themselves photographed — others did not want to be clicked as they thought they were not beautiful enough.

It boasts of images of women who pole dance to gain self-confidence, ladies who carry bundles of brooms on their heads, the adventurous women who ride horses and motorcycles, to the women who have to follow certain norms like the hijab and gloves covering their hands.

“The Atlas of Beauty” is a great gift for all ages, a manifesto for love, beauty and acceptance. The only drawback is the lack of information on several portraits, even as they evoke curiosity.

Nevertheless, what it does is demystify the concept of beauty, encompassing women irrespective of age, colour, race, culture, looks, size, ability and sexual orientation. (IANS)