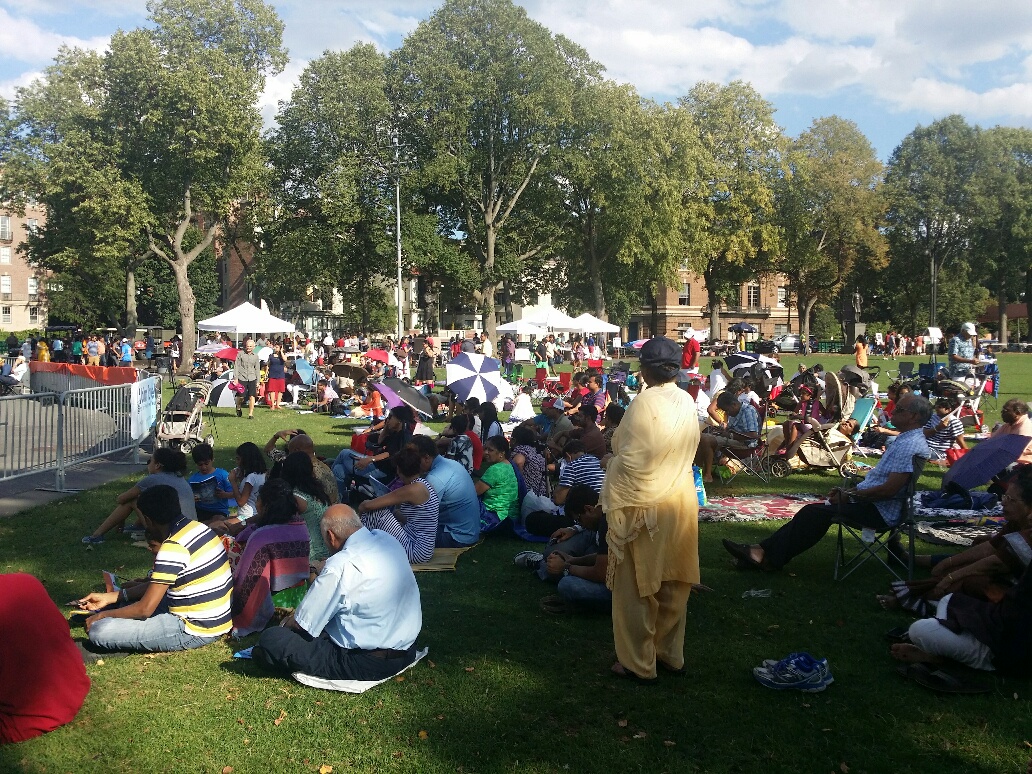 BOSTON–Ashraf M. Dahod, a high-tech serial entrepreneur, attended India Day celebrations as the Guest of Honor on Sunday at Hatch Shell in Boston. The event, which was organized by India Association of Greater Boston, known as IAGB, was attended by more than 8,000 people.

“Mr. Ashraf Dahod is known as a brilliant technologist and a very successful entrepreneur. But more importantly, Mr. Ashraf Dahod is a generous philanthropist,” said Syed Ali Rizvi, an IAGB director who introduced Dahod to the audience. “While he avoids opportunities to speak in public, he did speak as IAGB’s Guest of Honor at the 69th Anniversary of India’s Independence day on August 14, celebrated at the Hatch Shell in Boston.  His message was in complete sync with IAGB’s focus on preserving and promoting India’s culture. In his speech he hoped that IAGB will continue to do the important work of preserving our culture not only for ourselves but for our children and our grandchildren.”

Dahod talked about fostering and mentoring or adopting a family or a child, or passing on the skill sets that Indian-Americans have acquired to others so they can progress in life.

Dahod is president and CEO Altiostar. Before founding Altiostar, he had co-founded Starent Networks, which was acquired by Cisco Systems in 2009. Prior to Starent, Dahod had co-founded NetCore Systems, Inc, Sigma Network Systems, Inc and Applitek Corporation.

IAGB also recognized the service of Anil Saigal, former president of IAGB and a professor of mechanical engineering at Tufts Universiry. In addition, he is co-founder of community portal Lokvani. The organization gave IAGB Volunteer Award to Jatinder Sharma, who joined IAGB as a volunteer in the early 1970s.

“Our EC members are dedicated to IAGB and its cause. (They are) very hard working as you can see from the amount of work they have placed in making today’s event, an yet another successful event by IAGB,” said Voruganti. “IAGB is the only organization in the Greater Boston and New England area who organizes shows of this magnitude and at this prestigious address. It really feels proud to be an Indian at this events.”

Arth Joshi, Ashna Parikh, Alia Rizvi and Prisha Naduthota served as emcees of the evening. The theme of the cultural program was “fusion.”

Here is a list of cultural programs and with names of participants and their teachers and coordinators:

A creative fusion of “Imagine,” and “We shall overcome” fused with Hindi songs.

Academy of Creative Arts (ACA) is a school founded by Java and Hetal Joshi where 18+ different forms of creative and performing arts are taught under one roof in Burlington. Rising stars of ACA are going to dance on the latest hits of Bollywood top songs of today,

hip-hop is their style.

This item is a brilliant choreography combining traditional and non-traditional moves prescribed in Natyashastra describing Lord Vishnu and Shiva. Originally presented as part of Samprati for Vision-Aid in 2015, this item has been modified to fit the fusion concept.

A dance journey where the girls are excited to take you all to a tour from Bollywood to Hollywood, fun and energy packed hiphop dance performance on high heels,

An eclectic mixture of zumba and bhangra, this is a high intensity contemporary dance forms with foot tapping mix of Bollywood and Latin music showcasing colorful props and innovative costumes.

Nikita’s Bollywood dance academy Soni Kudiya will present an energetic, beautiful and a graceful performance on a Kathak, bhangra dance fused with contemporary and hip hop moves from the latest top Bollywood songs of 2016.

A fusion piece which is characterized by the dancers dancing in madness to the intricate beats of the mridangam, eternal whistles of the flute, and elegant vibrations of the sitar.

showcase the north and south aspects of India.

dance by the Dance Spirit team.

Academy of Creative Arts (ACA) is a school founded by Java and Hetal Joshi where 18+ different forms of creative and performing arts are taught under one roof in Burlington.

Every state in India has its own culture, own identity and its own lifestyle. Today, we are showcasing cultures from the North of India. So let’s sit back and enjoy a complete party with the most energizing songs. let’s ROCK!

A semi classical dance describes about lord Shiva the creator of auspiciousness, one who locks the moon in his hair. Husband of Parvathi, all the salutations to you, O lord.

Get ready for a power packed  fusion dance!!!. These dancers will mesmerize you as they dance and take you to rural India depicting harvest, wealth, glory , good times and bad times and transform by putting their best foot  forward to western hip-hop.  Dance is choreographed to popular folk song from southern coastal Karnataka, India and catchy western hip-hop song.