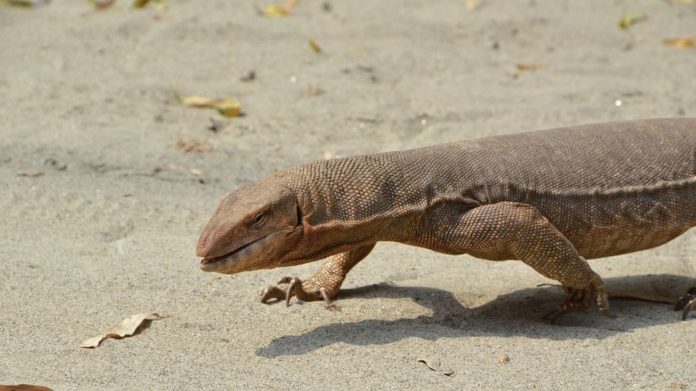 Agra–With the rainy season at its peak, slithery reptiles have been spotted in the city seeking shelter in residential complexes as well as in shops in the last two weeks.

On Saturday, a three-foot long monitor lizard was rescued by the Wildlife SOS team from the residence of Agra Divisional Commissioner Anil Kumar, at the Taj road. The creature was later released back to its natural habitat.

Earlier, in the morning the staff on duty had spotted the lizard wandering in the garden, following which they informed the senior officials.

Later, the Wildlife SOS team rushed to spot with necessary equipment including transportation units and protective gears. After ensuring that the staff were at a safe distance, they carefully shifted the reptile to a safe transport carrier. The reptile was kept under observation for a few hours and was later released back into the wild.

Omveer Singh, PA to the Commissioner said, “We often find snakes and monitor lizards in the premises and we have the Wildlife SOS helpline number on our emergency contact list. Their team was quick and efficient in conducting the rescue operation.”

Kartick Satyanarayan, Co-founder & CEO of Wildlife SOS said, “We thank the officials at the Agra Divisional Commissioner’s office for promptly alerting us. The monsoon has prompted a sudden increase in the appearance of reptiles. As common shelters for these reptiles are flooding, they are looking for safe and dry land, thus inadvertently being spotted in residential areas.”

Baiju Raj M.V, Director Conservation Projects at Wildlife SOS, said, “Monitor lizards are mostly non-offensive but can bite or even use their strong claws in retaliation if threatened or provoked. Therefore, our team had to be cautious while carrying out the rescue operation as they wanted to avoid agitating the distressed reptile.”

In another incident a four-foot long monitor lizard was rescued from the store room of Katiyal Industries, a shoe sole manufacturing unit located in Sikandra, Agra.

The Bengal monitor (Varanus bengalensis) or common Indian monitor is one of the four monitor lizard species found in India, all of which are protected under Schedule I of the Indian Wildlife Protection Act, 1972 and listed on Appendix 1 of the Convention on International Trade in Endangered Species (CITES), which prohibits the import or export of the animal or its body parts. (IANS)