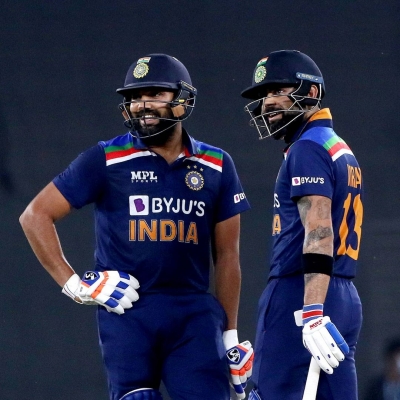 New Delhi–Indian cricket has finally taken the inevitable decision to have different captains for the red-ball and white-ball cricket in Virat Kohli and Rohit Sharma. However, the success of India’s split captaincy will very much depend on the camaraderie between the two heavyweights, with coach Rahul Dravid working as a catalyst.

Indian cricket has barely dealt with split captaincy and two power centres in the team. But with Rohit and Virat, who are ambitious and competitive men, the transition needs to be handled gently.

The team’s environment and success in major ICC events will lie in how maturely the two senior pros move on from here.

The day Kohli made a public announcement about quitting the T20 captaincy, it was a foregone conclusion that he would be relieved of the ODI leadership as well, though, the star batter had expressed his wish to continue leading the ODI side until the 2023 World Cup in India.

“Understanding workload is a very important thing and considering my immense workload over the last 8-9 years playing all three formats and captaining regularly for last 5-6 years, I feel I need to give myself space to be fully ready to lead the Indian team in Test and ODI cricket,” wrote Kohli on September 16, clearly indicating that he wanted to continue with the ODI captaincy.

However, the BCCI officials and the selection committee weren’t on the same page as Kohli after India’s early exit from the T20 World Cup and they wanted to see Rohit lead India’s ODI and T20I teams going forward.

Kohli, who took over the limited-overs captaincy from MS Dhoni in 2017, has been one of India’s most successful white-ball captains. In 95 ODIs, he won 65, giving him an admirable winning percentage of 70-plus. In 45 T20Is, he led India to victory 27 times. But, the lack of an ICC trophy is believed to have been the tipping point to bring Kohli’s tenure to an end.

It is understood that the murmurs of a split captaincy started after the 2019 World Cup where India lost in the semifinal. Rohit had hit five centuries in the tournament and had won the IPL title four times by then. When Rohit won a fifth IPL title as Mumbai Indians skipper in 2020, the murmurs turned into noise.

And that noise has become a reality now as the 34-year old Rohit has been appointed as India’s full-time ODI and T20I skipper.

“The All-India Senior Selection Committee also decided to name Mr Rohit Sharma as the captain of the ODI and T20I teams going forward,” the BCCI said in a statement on Wednesday.

While Kohli will continue to lead the Test side, Sharma has also been elevated as the vice-captain in the longest format, replacing Ajinkya Rahane in the role.

According to a Cricbuzz report, Rohit, who has always harboured captaincy ambitions, had made it clear to the board authorities that he would not take up only the T20 captaincy. He would accept the job only if the entire white-ball responsibility was entrusted on him.

Though he has won five IPL titles, Rohit will now be judged by the team’s performance in the 2023 World Cup, which India will host. Before that he will have a challenge in 10 months’ time when there will be a T20 World Cup in Australia. But the biggest challenge for the new captain could well be how he handles Kohli, who will have a powerful presence in the dressing room.

Both, Kohli and Sharma have praised each other’s skill and ability from time to time in the past. And India’s new white-ball captain Rohit in a recent interview has said that a batter of Virat Kohli’s quality along with his experience of playing in difficult situations, is very much required in the team.

“A batter of Kohli’s quality is always needed in the squad. To have an average of 50-plus in the T20 format, it is crazy and unreal. Obviously, with the experience he has, he has batted and bailed India out so many times from difficult situations,” Rohit said in a YouTube show ‘Backstage with Boria’.

“The quality and his kind of batsmanship is required. Plus, he is still a leader of the team. All those things put together, you don’t want to miss out. You don’t want to ignore that kind of stuff. His presence is very important to the team,” he added.

However, it’s also an open secret that both heavyweights has had differences as well. So, it would be interesting to see how new head coach Rahul Dravid handles this going ahead. Sharma has played under Kohli’s leadership for a long time now but for the first time there will be role-reversal in the limited-overs cricket.

And fans, the biggest stakeholders of Indian cricket will have a close eye on how Virat reacts, when he takes the field.

Notably, legends like Sachin Tendulkar, Sourav Ganguly, Rahul Dravid and Anil Kumble played under different captains. So, it all depends on how an individual takes it.

The 33-year old Kohli has a very aggressive on-field personality and while Rohit doesn’t have Kohli’s aura he is known to be equally confident as captain and player. Though, they have different ways of doing things and they perceive leading the team differently, both are effective.

Two senior pros have set big standards with their performances over a period of time and are proven match winners for India. So, their on and off-field camaraderie and respect for each other’s ambitions could decide the fate of India’s success going ahead.

It is no secret that India plays more matches than anyone else in the world because of the popularity of its cricket team and with a busy schedule ahead, having two different captains will definitely ease the pressure on both Virat and Rohit.

Well, everything has a ‘shelf life’ and the change is never easy but it is a ‘constant’ principle and Dravid, Kohli and Rohit are mature enough to see through it. (IANS)