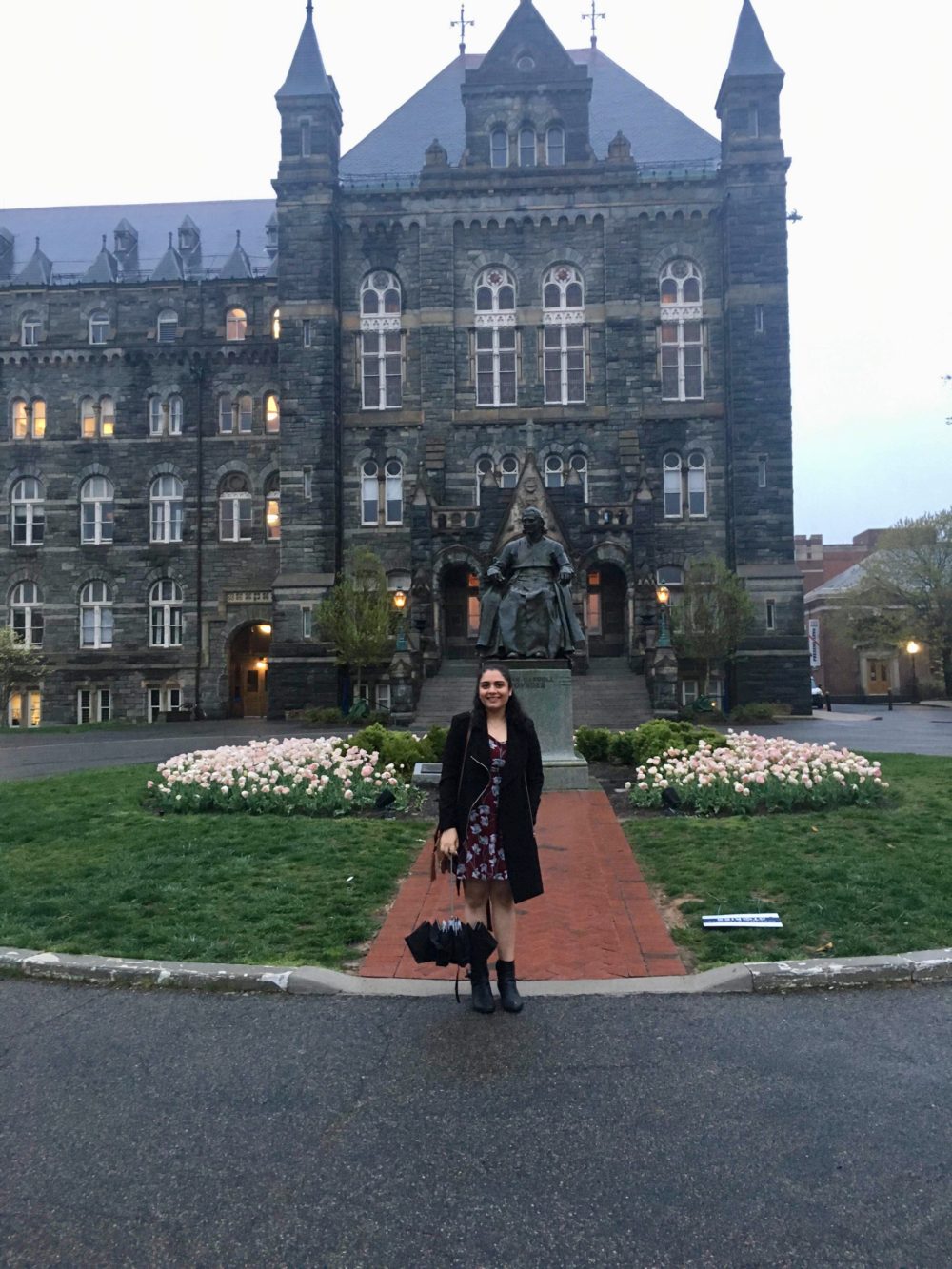 There is an old saying in Hinduism that dictates that one can never predict where and when they’ll discover inner spiritualism. For me this occurred on my exchange to Georgetown University in Washington DC.

When the University of Sydney provided me an opportunity to study abroad at Georgetown University, I was delighted to have the chance to live and study in the heart of American politics and government.

While studying at Georgetown had always been a dream of mine, what I had not expected was the chance to explore my faith and spirituality in a foreign environment while on exchange. Within days of arriving on campus, I discovered that Georgetown University offered its Hindu students an opportunity to explore and learn more about their faith through a full-time Director for Hindu Life and the Hindu priest chaplain.

Not only was I intrigued by the fact that a Jesuit institution was so open to students of other religious traditions, having never expected a Hindu priest in the Campus Ministry, I was deeply impressed by Georgetown’s commitment to its students from religiously diverse backgrounds. 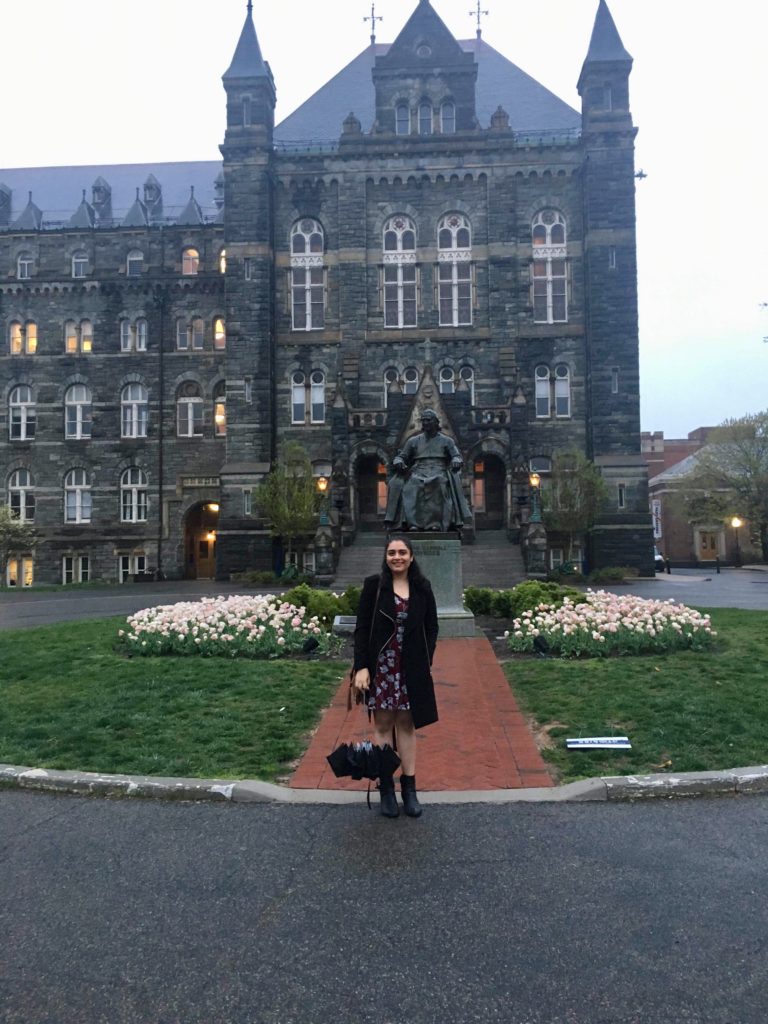 As a Catholic, Jesuit university, Georgetown welcomed students who belonged to diverse religious traditions, and promoted interfaith understanding, respect, and dialogue through its support for a wide array of organizations and programs. One of Georgetown’s core value is interreligious understanding, and the Office of Campus Ministry encourages students to explore the wide array of religious services, holiday celebrations, and small group opportunities on campus both within and outside of their own tradition.

Our Hindu life retreat coincided with the Muslim life retreat, giving us the opportunity to interact with students from a different religious background.

While I was never deeply religious to begin with, the opportunity to learn about my faith from someone who was deeply knowledgeable about it, and could make Hinduism more relatable to university students was too good to pass up.

I decided to take the plunge and attended the weekly Aarti service on Sunday. While I was usually unable to understand most of the Sanskrit prayers and Hindu pujas at the temple back in Sydney, having attended many religious services and Aartis in my life, I thought I knew what to expect.

At Georgetown, however, when Brahmachari Sharan began the weekly service, his ability to explain rituals and pujas in simple terms really made it a service unlike any other I had attended growing up. Seeing other Hindu students around me brought back the sense of community that I had left back home in Sydney. The tasty Indian dinner that followed afterwards was always a bonus. Since then, attending the weekly Aarti became an important part of my exchange life at Georgetown, just like going to classes and eating at the dining hall with friends.

Having enjoyed attending the weekly service, when the opportunity to join Hindu life at Georgetown on their annual spiritual retreat into the Blue Ridge Mountains of Virginia, overlooking the Shenandoah Valley came up, I knew it would be something I would enjoy. The ability to disconnect, albeit for one night, from the busyness of campus life, was too good to pass up.

During the Hindu Life retreat, through the guidance of Brahmachari Sharan, I participated in various activities and workshops focussed on the experiential aspect and wisdom of Dharma. However, what made the experience stand apart was the time and planning Brahmachari ji had invested in ensuring everyone on the retreat learned something new about the faith.

From playing Hindu jeopardy to writing group reflections about Hindu rituals, the activities challenged us to think deeply about the way Hinduism affected us in our daily lives. Having the chance to discuss problematic aspects of certain rituals and beliefs, understanding the value of Hindu rituals and pujas, and appreciating the value of faith in connecting us to our culture were all aspects of the retreat.

The best part, however, was a Puja walkthrough where Brahmachari Sharan provided each participant a personalized puja kit and walked us through the process of conducting puja step by step. The personalised kit was not only small enough to be transportable, but was compact enough to fit all the required elements in a plastic box about the size of a lunch box.

As the retreat came to end and began our trip back to the Georgetown hilltop, I reflected on the interconnectedness of my faith and culture. After spending a weekend thinking about what being a Hindu meant, I was deeply thankful for the opportunity to explore my faith with my peers and gain a deeper understanding about it, unexpectedly on exchange, far away from home.

Having recently returned from an incredible semester abroad at Georgetown University, I have had some time to reflect on the impact studying at Georgetown and living in Washington D.C has had on me personally. While studying at Georgetown was always on the list, I truly believe that I could not have picked a better institution to achieve Georgetown’s mission of ‘Educating the Whole Person’.

(Nishtha Sharma is an international relations student at the University of Sydney in Australia. She recently completed a semester abroad at Georgetown University in Washington DC and served as a research assistant intern at the Woodrow Wilson International Center for Scholars. )