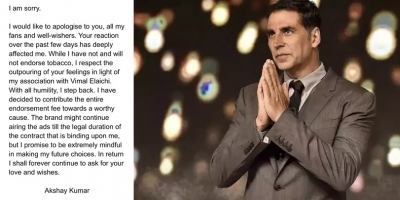 Mumbai– Bollywood superstar Akshay Kumar, who was recently seen in an advertisement of a tobacco brand along with Ajay Devgn and Shah Rukh Khan, has issued an apology for featuring in the commercial after it received flak from the netizens.

The actor took to his social media to tender an apology through a long note. He wrote, “I am sorry. I would like to apologise to you, all my fans and well-wishers. Your reaction over the past few days has deeply affected me.”

Although the advertisement was for an ‘elaichi’ (cardamom) product, given the laws surrounding surrogacy marketing in India, it triggered a slew of memes and reels as people on the Internet dug up an old video of the ‘Bachchhan Paandey’ star where he can be seen promising that he would never work in a tobacco product advertisement.

In fact, Goa BJP’s medical cell convenor Shekhar Salkar also urged Prime Minister Narendra Modi to strip Bollywood actors Amitabh Bachchan, Ajay Devgn, Akshay Kumar and Shah Rukh Khan of their Padma Awards for featuring in such ads. However, it is to be noted that the Government of India earned Rs 4,962 crore in taxes for the financial year 2020-2021 from tobacco companies.

Continuing his note further, Akshay wrote that he still stands by what he said in that particular video that surfaced on the Internet, “While I have not and will not endorse tobacco, I respect the outpouring of your feelings in light of my association with Vimal Elaichi. With all humility, I step back. I have decided to contribute the entire endorsement fee towards a worthy cause.”

“The brand might continue airing the ads till the legal duration of the contract that is binding upon me, but I promise to be extremely mindful in making my future choices. In return I shall forever continue to ask for your love and wishes(sic)”, he concluded. (IANS)