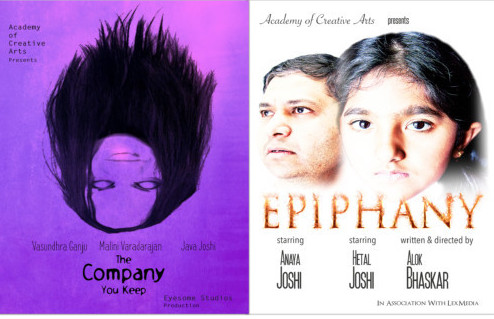 BURLINGTON, MA—Academy of Creative Arts will hold its first short film festival on March 19 at the Academy’s facility in Burlington, MA.  This is an effort by the Academy to encourage local film makers.

Apart from screening of the two short films – “Epiphany” and “The Company you Keep”,  you  meet with cast/crew and discuss possibility to get involved in future projects.

So much good, so much misery – How do you illustrate a fresh story about life? Epiphany, an emotionally mature film by Alok Bhaskar, stands up and delivers and lets you make that choice by exploring the purpose of living and making it contagious.

An excellent central performance by father played by Hetal Joshi and daughter portrayed tenderly by Anaya Joshi paints a direct and profoundly affecting tale of human trials and tribulations. The chemistry between the pair onscreen is no doubt enhanced by the fact that Hetal’s real life daughter, portrays his on screen offspring so the emotions become real, soon. Hetal a celebrated actor for his comic timing in Boston, mounts on the ‘serious-actor’ horse and shows his untapped shades as an actor. Anaya’s understated and virtually wordless reaction works beautifully. Such poise and command at that is age is rare and magical.

Epiphany doesn’t rapidly morph into a dire drama in which the protagonist battles bigoted external forces but the director emphasizes on restraint and choices made by him. With an immense scope of melodrama, the director keeps it subtle.

Epiphany has stuck with me in the most rare and of ways, and each time I think back to it, I discover some new element to love, love life. So come out and hum in unison – Love you Zindagi!

The Company you Keep

A startling supernatural thriller that will make your heart pound, The Company You Keep, comes fresh to suspense. On the surface it looks like a case of whodunit. But this movie is more mood than plot. And the mood is expertly handled by the canny writer/director Alok Bhaskar, by brewing a mix of light and dark and everything in between.

Surgically precise with a run time of 20 minutes, there are so many terrific elements in this short movie – reminding us that unseen forces often make for the scariest, most memorable cinematic experiences.

Also notable is the stellar cast that brings the Director’s vision to life with finesse. Java Joshi as the crafty psychic Miss Tara, attempts to maintain control scarier than outright terror, testifying her credibility as a serious and skillful actress. Vasundhra Ganju, portrays the straight shooter investigating officer with much suave and ease. Although in a support role, Malini Varadarajan as the compliant and reverential assistant, instils a sense of dread and confusion in the audience during the film’s quieter moments.

The director’s decision to opt for a slow ratcheting-up of tension is a wise one, given that it lends further credence to the scariest bits – the ones that serve to remind you that you never know exactly what’s lurking round the corner. Solid confirmation of Alok’s status as an upcoming director to watch out for in the Boston Area.

With a plot that never darts in the direction you expect it to with a truly ingenious climax, The Company You Keep, creates a shocker which is likely to rattle around in your brain for days after. Come satiate your hunger for a thriller!

If audiences want to see these two films – you can watch them on 19th March at 4pm at Academy of Creative Arts Short Film Festival in Burlington, MA.