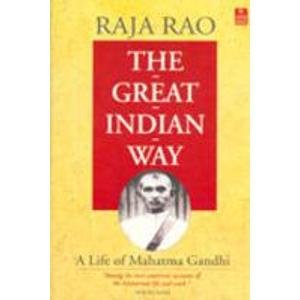 New Delhi– When Raja Rao’s biography of Mahatma Gandhi was published in 1998, it was seen as a coming together of two great minds. That it continues to be so today, a quarter-century later, is a testament to the originality of its narrative in the Puranic style of storytelling – “an experiment in honesty” as the author himself had put it

“I am convinced that the time is ripe to offer this and other Raja Rao works to a discerning reading public, not the least because

India has changed so much. It is at last ready to receive his myriad gifts of heart, mind and spirit,” Makarand Paranjape writes in a humongous new Introduction to “Mahatma Gandhi: The Great Indian Way” republished by Penguin to mark the 151st birth anniversary of the Father of the Nation on October 2.

“An important feature of Indian traditional society, which persists to this very day, is its enormously rich and varied method of chronicling and celebrating life…Raja Rao belongs very much to this Puranic tradition. He has performed his duty as a writer as faithfully and sincerely as our ancient poets, who have told the stories of gods and demons, heroes and villains, apsaras and princesses, sages and mendicants with such zealous relish.

“This book is Rao’s retelling and tribute to Gandhi’s extraordinary life,” Paranjape, a prominent Indian novelist and poet who is currently the Director of the Indian Institute of Advanced Studies, Shimla, writes in the Introduction, which also provides an overview of Raja

Thanks to the Puranic style, Rao was “seeing with three eyes. The first eye sees only the facts. The second espies the fable behind and around. It is only the third eye, the eye of wisdom, that can combine both to see into the depth of things, their secret significance and

meaning”, Paranjape writes, his Introduction interweaving with Rao’s preface and occasional quotes from the book.

The Puranic style, Rao explains in the preface, “is the only style an Indian can use – fact against custom, history against time (and) geography against space and it is these coordinates that have to change and make life larger than it seems, and its small impurities and accidents and parts, must perforce be transmuted into equations where the mighty becomesnormal, and the normal in its turn becoming myth. Prose and poetry thus flow into one another, the personal and the impersonal, making the drama altogether noble and simple”.

One might as well ask: What is Raja Rao trying to tell us in this modern Purana on Gandhi? The clue, writes Paranjape, is offered in a lecture titled ‘Wisdom and Power: A Marriage of Necessity’ he delivered on May 24, 1972, at the Woodrow Wilson Centre, Washington DC, where he was a Fellow.

“Rao’s fundamental premise was that ‘every government promises its subjects happiness of one style or the other. Whether it be the Holy Roman Empire or the American Revolution or the Hindu state, they could create a condition or conditions for the total fulfilment of man, this fulfilment being that realisation of God, of Truth or Peace’,” Paranjape writes.

It was only Gandhi, according to Rao, “who understood that politics was sacred, making holy the public life and organisation of a nation. That was the true meaning of swaraj. It is this story of sacralisation that Rao tried to tell in ‘The Great Indian Way’. This is how independent India should have turned into the ideal state where Gandhi makes Nehru his heir, and gives him his blessing to rule in the name of India,” Paranjape writes.

Sadly, “the story of India had turned out somewhat differently, not working itself out as the collaboration of ideal archetypes that Rao had envisaged, like the combination of Krishna and Arjuna. Or, to change the terms of reference, the city of God ruled by the philosopher king,” Paranjape says.

As Rao put it: “Had Gandhi lived long enough, and had Gandhi attained the integrity of non-duality in himself, which he never claimed he did, Gandhi might have made Nehru, his Mughal Emperor, construct an India that might have resolved many of the intricate problems of internal and international politics in a truer perspective.”

Thus, “in Gandhi’s kingdom of Sri Rama, wisdom and power have to be divided only to be irrevocably married. But, in retrospect, that was not to be”.

As Rao put it: “Gandhi failed himself, he could never be the Guru of Nehru, thus came the catastrophe of Pakistan, and the massacres and failures of India as a moral force in the world.”

“Rao himself told me,” Paranjape writes, “that on the eve of Independence, he and a few close friends were desperately looking

for a miracle that might avert the partition of India. They thought a true sage might, through an act of supreme sacrifice avert it. Instead Gandhi, the father of the nation, himself was assassinated. But wasn’t that the sacrifice that Rao had been expecting? ‘No’, he said sadly, ‘it was too late. Gandhi died to save India from going up in flames. It was, at best, a desperate last-ditch effort, after most of the damage had already been done’,” Paranjape adds.

“It was Gandhi more than anyone else, who represented the integrity of the non-dual ideal that India stands for. That is what he wanted to realise in his idea of Ramrajya and swaraj. But the oneness of Hindus and Muslims that he gave his life for could not be accomplished, nor the horrors of partition averted,” Paranjape writes.

With an emphasis on the idea of dharma as a framework for Gandhism, both in South Africa and India, this is the story of the man as much as the Mahatma.

Rao upends the genre of the literary biography with inventive non-linear chronology, through dialogue and anecdote, situating the physical within the metaphysical, and with a text that is both retrospective and contemporary at the same time.

By mapping genealogies and distilling them, Rao focuses on Gandhi’s years in South Africa, the birth of non-violent resistance, and then moves into the epic freedom struggle in India, which brought Gandhi to worldwide renown in his own

“If I have written thus (in the Pauranic style) another life of Gandhi, it’s because most of the biographies (whether American, or French, Greek or English) are true generally to facts but not so to meaning. There are, however, biographies by Indians – the official and monumental one is an extravagant dictionary of dates and facts, and the more able and personal ones exhausting demonstrations of the amalgam of human existence. A biography of Gandhi, it seemed to me had to be written as it were from the inside, desperately, faithfully. It’s an ambitious task. Should one have done it – I have,” Rao concludes in the preface. (IANS)