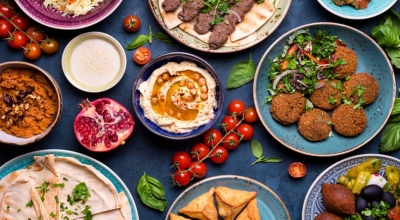 New Delhi– Edesia, the multi-cuisine restaurant at Crowne Plaza New Delhi, takes you on a delicious trans-continental journey. Okhla will host a Silk Route Food Festival for its customers. The culinary extravaganza is part of the hotel’s 12th anniversary celebrations and features food stories through the eyes of Marco Polo, one of history’s greatest explorers.

* Merchant Of Venice: An Italian Household set up with a fireplace depicting the hometown of Marco Polo

* Mediterranean Nights: A cabana style seating with the hues of blue & white; an integral part of Marco Polo’s journey

* The Chinese Checkers: Dedicated to Kublai Khan, the emperor of Mangol empire where Marco Polo served as key official, with a decor inspiration from the Lantern festival

According to Pradipt Sinha, Director of Food and Beverage, “As a hotel, we are focussing on experience-based food festivals with history entwined with food. Silk Route Food Festival spells the culinary tales from one of the most important trade routes of ancient era coupled with thematic ambience. Guests can choose if they want to take a seating in the European setup, Mediterranean set up or Asian set up which would be fascinating.”

According to Shuvendu Banerjee, General Manager, “We have a host of chefs in our hotel trained across diverse national and international cuisines. Curated festivals such as the Silk Route give them an opportunity to showcase their passion & talent which translates into lifetime experiences for our guests. The modern travellers & food enthusiasts are looking for interactive experiences, tailor-made delicacies, novelty in cuisines and social media worthy presentations and this is exactly how we would like to evolve with our food and beverage.”

Is Ravioli a close relative of Dumplings? Can Spaghetti make friends with a Wok instead of falling in love with Pesto? Edesia decodes the secret connection of cuisines across the Silk Route in the most delectable ways.