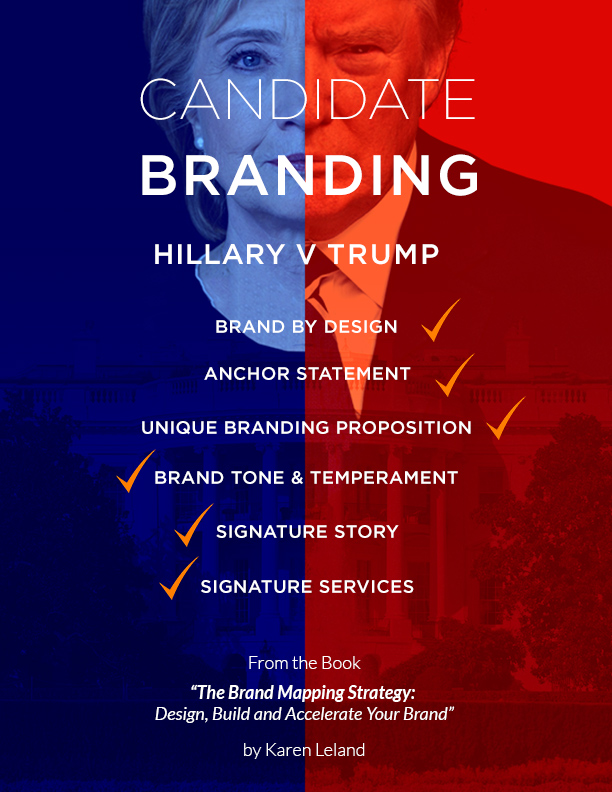 Despite having the two highest unfavorable ratings of any major presidential candidates in history, Donald Trump and Hillary Clinton have outlasted their competitors—and one of them is going to become the leader of the free world. What does success in the face of such highly unfavorable ratings teach us about personal branding? And what can working professionals at every level learn from it?

Below, brand strategist and revered media expert source Karen Leland, author of the newly released title, “The Brand Mapping Strategy: Design, Build, and Accelerate Your Brand, ” examines both candidates’ personal branding successes, challenges and resulting lessons for us all in six specific areas. According to Leland’s predictive Brand Mapping Matrix, the success of any brand—in business, politics or otherwise—boils down to how the brand performs across these six key dimensions.

Leland details each dimension below, including exactly how each candidate fared therein as well as the correlated business brand takeaways, to help other enterprising professionals achieve in kind.

Trump: The Donald has clearly defined himself as the billionaire Maverick, owing no one anything. Trump has carefully crafted his image as the anti-establishment candidate proudly going against the grain. As a general strategy, it has allowed him to get away with more than the typical business leader or politician normally would.

Clinton: Despite her best efforts to promote herself as “the qualified candidate,” many Americans have by default stamped Clinton with the brand of Matron—part of the old guard of Washington politics. Recently she has begun to pivot and is trying to find her way to a brand by design based on straight-talking thoughtfulness.

*** Personal Brand Takeaway: Every business person, from secretary to CEO, needs to start by assessing the personal brand they currently have and be truthful about the degree to which it exists by design—or default. Then they need to take stock of the impact that current brand is having. Is your brand producing the reputation you desire? Is it creating the environment and responses you are looking for? If not, a pivot to a more powerful personal brand may be needed.

Clinton: To date, Mrs. Clinton has made her marketing bottom line “I’m the woman candidate,” but that has not played well with Sanders supporters and younger voters in general. While Clinton’s status as the first woman Presidential nominee is certainly history-making and a proud moment, as an elevator pitch, it’s flawed. She would be better served by focusing on another message (consider Obama’s focus on messages of hope and change, as opposed to his race) that resonates with a wider slice of democrats and the population at large.

Trump: Four words—“Make America Great Again.” This single sentence has become Trump’s signature call to arms, his reason why voters should check the box next to his name come November. The issue Trump will face as the election gets closer is how he will translate this general idea into specific policies.

*** Personal Brand Takeaway: All business people need to be able to present their brand in less than a minute. For example: When at a cocktail party you are asked the standard, “What do you do?” can you answer in a few short sentences that pique the listener’s interest? If not, your anchor statement needs some work. In addition, it’s important to pay attention to how your anchor statement is resonating and landing with your desired audience.

Trump: The presumed Republican nominee, Trump has taken a two-pronged approach to differentiating himself. First off, he is keen to point out (at every possible opportunity) that he is a businessman, as opposed to a career politician. Secondly, his message of “I’m willing to go it alone,” whether it relates to raising money to fund his campaign or being supported by the Republican party, is at the heart of his “why I’m unique” message.

Clinton: Hillary’s strongest point of differentiation to date has been “I’m the woman candidate.” The problem is that too much of her messaging has focused on this, and the voters don’t really seem to care.

*** Personal Brand Takeaway: Positioning yourself by specifically articulating how your brand speaks to the needs of your audience, and the unique way you address those needs, is critical to creating an effective personal brand. And the more specific you can be, the better.

Clinton: Clinton’s tone has consistently been one of a serious Implementer. The tonal subtexts to her speeches ring with “I’m experienced, I know what I’m doing and I can get the job done.” Her demeanor, while dignified, is missing an accessibility (and even friendliness) that voters need to see in order to wholeheartedly embrace her as their Presidential candidate.  However, given the alternative, it may be enough to win her the highest office in the land.

Trump: Trump is always Trump. To some, his brash pronouncements play with a tone of rugged individualism. For others, (even some members of his own party) his demeanor shows up as angry, and even childish in cases. So much so that the question of his temperamental suitability to be President has become a Democratic rallying cry. Likewise, Trump’s tone has some Republicans begrudgingly supporting him for the sole “anyone but Hillary” reason. Not exactly the inspiring message you would want your personal brand to create.

*** Personal Brand Takeaway: What you say has power, but the way you say it—your tone—has just as much impact. Every businessperson needs to be aware of how their brand tone is coming across (online and off) and adjust where necessary. In addition, taking any tone to an extreme will always backfire: Too serious or too snarky both harm a brand in the long run.

Trump: Rather than focus on a narrative based on how his past has informed his bid for the Presidency, Trump is pointing to the present problems America faces as his reason for seeking office. But by doing so, he is missing the opportunity to tie his brand to a bigger, more historical reason for running.

Clinton: After her win in California on Super Tuesday, Hillary Clinton spoke about her mother, the influence she had on her life and how the way she grew up set her on a path to public service. Clinton has skillfully integrated her history into her narrative and connected the dots from how what she learned there has brought her to here.

*** Personal Brand Takeaway: Never underestimate the power of a good story. A strong (and truthful) narrative about where you came from and what has influenced you to do the work you now do can connect you with your customers, employees and colleagues at a deeper level. Your brand needs to be more than a single sound bite or pithy elevator pitch. Otherwise, you run the risk of damaging your brand when things don’t go exactly as you planned. The best brands feature multiple, complementary messages that weave together to form an accessibly complex and in-depth communication.

Clinton: At the heart of Hillary Clinton’s brand is her varied and deep experience in government—and her proven ability to get things done in a political system that makes this challenging at best. Her particular expertise in foreign relations—especially at this time in American’s history—gives her a powerful place to stand as the candidate of choice. She is able and willing to talk about the “how” of the why.

Trump: In almost direct opposition to Clinton, Donald Trump’s brand is rooted in being “not” a government insider—but a business one. Continually providing tough talk about his corporate success, negotiation expertise and business acumen, Trump is presenting voters with the idea of a president who would function more like the CEO of a company than the head of state. While this “non-establishment” message is resonating with many people, the downside is Trump’s lack of specifics and seemingly naïve understanding of how things actually work in Washington and the protocols that keep the wheels turning—thus causing a questioning of his suitability for the job.

*** Personal Brand Takeaway: Know exactly what your brand brings to the table and how it stacks up against your competitors, and craft a powerful way to talk about it that inspires confidence in others. The fulcrum of your brand needs to rest on the material ingredients of your values and commitments.

A standout style (be it a brash Trump or competent Clinton) is a plus, but it will only take you so far. At some point going beyond taking a stand for what you believe in and specifically letting people know how you plan to get there will become a central issue. Think about one area where your personal brand is being expressed more in talk than displayed in action and focus on aligning the two.