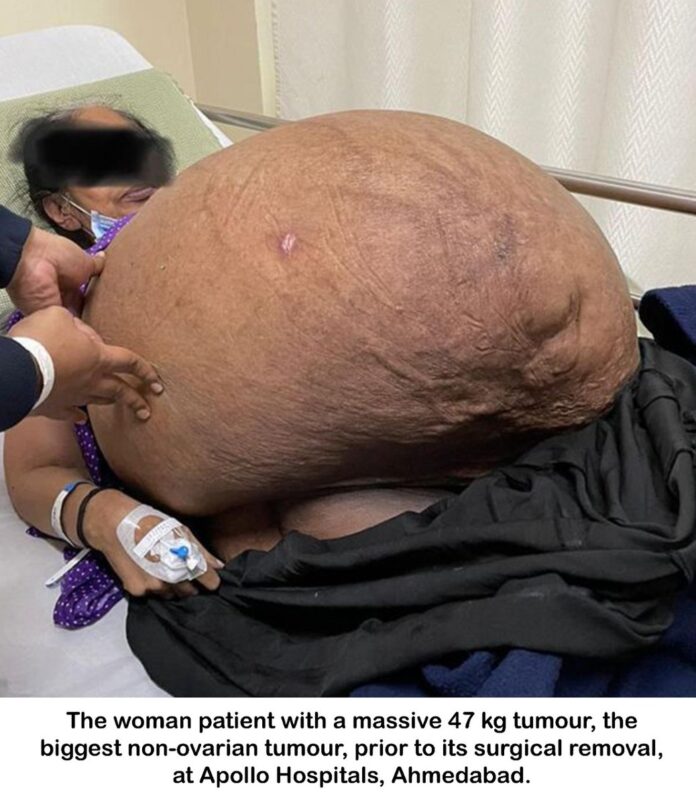 Hyderabad– A team of doctors at Apollo Hospitals, Ahmedabad, gave a new lease of life to a 56-year-old woman by surgically removing a 47 kg tumour – arguably the biggest non-ovarian tumour successfully removed in India so far.

The woman, a government employee and a resident of Devgadh Baria in Gujarat’s Dahod district, had been carrying the tumour for 18 years and was bed-ridden for the past few months.

Apart from the tumour, the team of eight doctors, including four surgeons led by chief surgical gastroenterologist Chirag Desai, also removed abdominal wall tissues and excess skin weighing around 7 kg during the surgery.

Following the surgery, the bodyweight of the woman dropped to 49 kg. As she could not stand straight, her body weight before the surgery could not be measured, Apollo Hospitals announced this here on Tuesday.

“It was a high-risk surgery as the woman’s internal organs such as liver, heart, lungs, kidneys and uterus were displaced because of the pressure created by the tumour in the stomach wall. Getting a CT scan done was also difficult as the size of the tumour obstructed the gantry of the CT scan machine,” said Desai.

The woman’s blood pressure was altered due to the squeezed blood vessels and she had to be given special treatment and medicines before the surgery to ensure that she does not collapse due to a drop in blood pressure post the removal of the tumour.

“Fibroids are common in many women in the reproductive age group, but rarely does it grow this big,” said onco-surgeon Nitin Singhal, who was part of the team.

The problem for the woman started 18 years ago with unexplained weight gain in the abdominal region. Initially, she resorted to ayurvedic treatment, but in vain. In 2004, she underwent sonography which revealed a benign tumour and the family opted for surgery. However, when the doctor began the surgery, it was found that the tumour was attached to internal organs. Considering the risks involved, the doctors terminated the surgery and sewed her up.

Since then, the woman’s family consulted several doctors, but in vain. In the meantime, the size of the tumour kept on growing and in the past two years, it almost doubled in size, affecting her quality of life.

Eventually, the family approached Apollo Hospitals, where the doctors, after a thorough assessment, decided to carry out the surgery on January 27. Following post-operative care and rehabilitation, the woman was discharged from the hospital on Monday. (IANS)