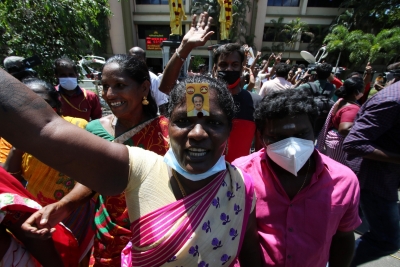 Chennai–In an eccentric act, a 32-year-old woman Vanitha in Paramakudi district of Tamil Nadu cut the tip of her tongue as a fulfilment of her vow that the DMK should come to power, said a senior official at the Government Hospital there.

“The woman had cut the tip of her tongue measuring about one centimetre. She was brought to the hospital on Monday. The cut portion of the tongue was missing. The open wound was closed with sutures. Her condition is fine,” N.R.Naganathan, Chief Medical Officer, told IANS.

He said there may not be major impairment in her speech.

Vanitha, wife of a man called Karthik, was brought to the hospital in an ambulance at about 11 a.m, Naganathan said.

The election for the 234-member Tamil Nadu assembly was held on April 6 and counting of votes took place on Sunday. (IANS)