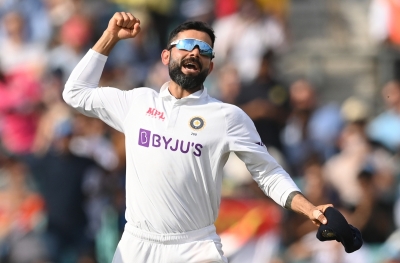 New Delhi– Stylish Indian batter Virat Kohli, who quit Test captaincy earlier this month, said “moving on” is also a part of leadership, to understand that “maybe the environment needs a different direction”.

Speaking at a business forum, Kohli highlighted that captaincy also has a fixed ‘tenure and time period’.

Kohli led India in South Africa Test series but a day after the visitors were beaten 2-1, Kohli took to social media to announce his decision to give up Test captaincy.

“See, I think firstly you need to have a complete understanding of what you set out to achieve and whether you have achieved those targets or not. Everything has a tenure and time period, so you have to be aware of it. As a batter, you might be able to give more to the team, so take pride in that,” he said while speaking on an episode of FireSide Chat.

Kohli took over from MS Dhoni as India’s Test captain as early as 2014. He led India to 40 victories in 68 Tests, becoming India’s most successful captain in the longest format.

“You do not need to be a captain to be the leader. When MS Dhoni was in the team, it was not like he was not the leader, he was still the guy from whom we wanted to have input. To win or not win is not in your hands, the striving for excellence and to be better every day, is not something you can do short term. When it comes to a culture, it will last beyond your playing years and your responsibility.

“To add to that, moving on is also a part of leadership, to understand the right time to do that. To understand that maybe the environment needs a different direction but obviously with the same cultural value. You continue to contribute to the team in the same manner butin a different role.

“I think one has to embrace all kinds of roles and opportunities. I have played under MS Dhoni for a while and then I became the captain, my mindset has been the same all this while. I always thought like a captain when I was just a player in the team. I want to make the team win. I want to be my own leader,” he added.

Kohli had quit T20I captaincy after the T20 World Cup in October last year but said at that time that he wanted to carry on as ODI and Test captain. However, he was later removed as the captain in the 50-over format of the game following India’s early exit in the T20 World Cup.

He then played under KL Rahul’s captaincy in the ODI series in South Africa. He will play under Rohit Sharma in the upcoming ODI and T20I series against the West Indies in February. (IANS)