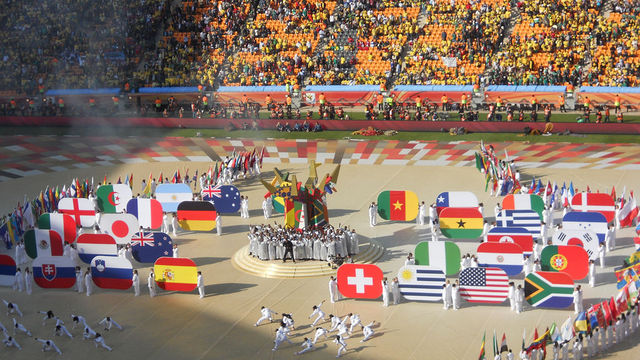 “The love of football unites the world in one team, independent of language or ideology,” the Russian president stated during his speech, as reported by Sputnik news agency.

“Football is truly loved here and it is called love at first sight, since our first official match here in 1897,” Putin said.

“I hope fans and teams enjoy their stay in Russia, an open, hospitable and friendly country with people who have the shared values. Football brings us altogether in one team, we are united by this spectacular game,” he added.

“This tremendous sports event is being held in Russia for the first time and we are sincerely glad about this. At first sight football in our country is not the most massive sport, but love for football in this country is real,” he said.

“It is love at first sight — starting from the very first official match that was played in Russia in 1897,” Putin added.

“We were making preparations for hosting this grandiose event with responsibility and we did our utmost to let the fans, athletes and specialists to get immersed in the atmosphere of a marvelous football festival and, of course, to enjoy their stay in Russia — an open and hospitable country, and to make new friends and associates.”

Artistic performances from UK singer Robbie Williams and Russian operatic soprano Aida Garifullina were the highlights of the opening ceremony.

Casillas, who helped Spain to win the 2010 edition of the World Cup, was accompanied by Russian model Natalia Vodionova and presented the trophy that the winning team will be awarded after the July 15 final, reports Efe news agency.

The trophy is made of more than six kilograms (13.2 pounds) of gold.