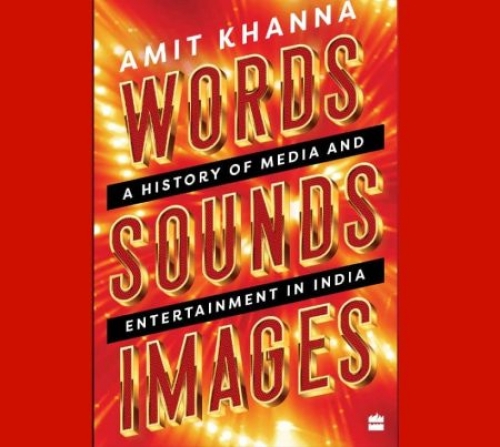 New Delhi– The first-of-its-kind book that presents the history of media and entertainment in India — from the times of the Indus Valley Civilisation right up to the 21st century — ‘Words Sounds Image’ (HarperCollins India) by author Amit Khanna will be released in the capital on December 13 at the Nehru Memorial Museum and Library at 6 p.m.

The book starts with an examination of the origins, looking at a wide array of aspects including the state of entertainment during Harappan and Vedic times, details from the Natyashastra, the early drama, music and dance of Kalidasa, the development of ragas, musical instruments and early folk traditions, the genesis of classical dance forms, developments through the ages, including in the Mughal period and in the southern kingdoms, in the northeast, and under the Marathas and the British.

The author, Amit Khanna, has worked across every segment in the field of media — print, radio, television, films, stage, live entertainment and digital media. He started his film career as an executive producer, writer and lyricist with actor-film-maker Dev Anand’s Navketan Films in 1970. He has written the lyrics of 250 film and several non-film songs and in the 1980s, wrote, directed and produced many critically acclaimed feature films, documentaries, commercials and TV programmes.

In 1989, he set up the Plus Channel, India’s first integrated media and entertainment company, a platform for many award-winning films. He has also been an editorial adviser to The Economic Times, Probe, Take 2, Online, Super Cinema and other publications.

He is also the founder chairman of Reliance Entertainment (from 2000 to 2015), India’s leading studio. Under his leadership, Reliance Entertainment diversified into production, distribution and exhibition of films across formats, radio and TV broadcasting, direct-to-home TV, gaming and online content creation in India and abroad.

He has been on the governing councils of the Jamia Millia Islamia Media Research Centre, and the Film Institutes in Pune and Kolkata, as well as Whistling Woods. He was the first Indian to serve on the international Emmys Jury.

His anthology of Hindi poetry, ‘Anant Raa’ (infinite verse), was published by HarperCollins in 2013. (IANS)