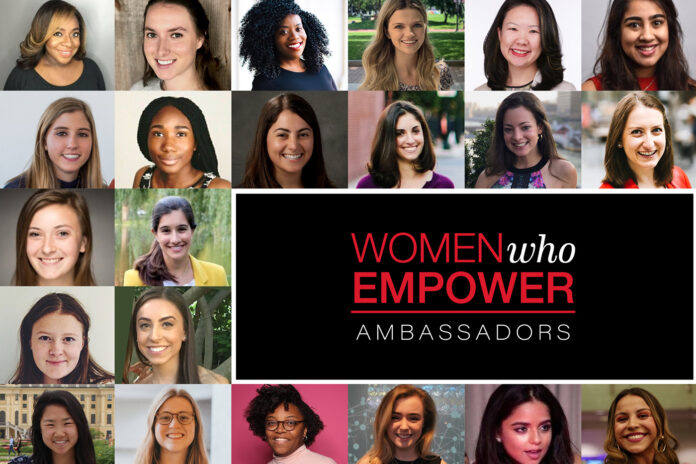 And representing 19 countries, from South Africa to Switzerland, and from Italy to India, they are members of Northeastern’s inaugural cohort of Women Who Empower ambassadors.

An extension of the university’s Women Who Empower initiative, the ambassadors are among a select group of student and alumni leaders who share a commitment to advancing women and creating opportunities for all members of the Northeastern community. The initiative was created by Diane MacGillivray, Northeastern’s senior vice president for university advancement, with trustee and chair emeritus Henry Nasella, to offer inspiration, learning and community, particularly for women who have entrepreneurial aspirations.

Through events, programs, and activities, the ambassadors will work together to foster new connections and encourage and elevate others. This will be a network of people who share stories, an investment in one another’s success, and values and ideals of creating a community where every member can thrive, MacGillivray imparted from the Egan Research Center, where she hosted an online event commemorating the launch of the ambassador program ahead of the first week of the university’s fall semester.

Among the 32 ambassadors is Binja Basimike, who has worked in health technologies since she received a health sciences degree and master’s in public health from Northeastern in 2012 and 2013.

“For me, Northeastern has been more than just a place I went to school,” Basimike said from Kinshasa, the capital of the Democratic Republic of the Congo, where she recently moved from Boston. “It’s where I found my community. It’s where I’ve been able to create additional communities like the Northeastern Black Alumni network.”

She underscored the importance of maintaining connections between members of various disparate groups and organizations on campus.

“I think Northeastern does a very good job at communicating when they know how to find you,” Basimike said.

Emiliana Martinez, who is studying international business with concentrations in entrepreneurship and supply chain, said that it’s important to create initiatives in which women can feel confident and in charge of their voice. The new ambassador advocated for continued partnerships with other clubs on campus, including those that are male-dominated. She emphasized the importance of outreach, especially to younger students.

Devina Raithatha, an international student from Nairobi who graduated in 2018 with a bachelor’s degree in business administration and is now pursuing her master’s in computer science through the Align program, said that the university allowed her “to find a voice” and that discovering the Women Who Empower community was one of the best things that has happened to her.

Raithatha, who is also a member of Northeastern’s Young Global Leaders program, said it’s important for individuals to uplift each other. She supports teaching women to advocate for themselves and enabling them to create their own paths. Those who are successful in their fields should extend a helping hand to others, she said.

MacGillivray professed that she is proud of her career at Northeastern, and that she feels her work is supported at the university. She described the Women Who Empower initiative as a “passion project” that has enabled meaningful impact on the next generation of leaders.

In sponsoring this network, MacGillivray affirmed her personal commitment and charged the ambassadors to be bold as they move forward in their work.

“You all give me the strength and the energy to do the work that I do,” she said.