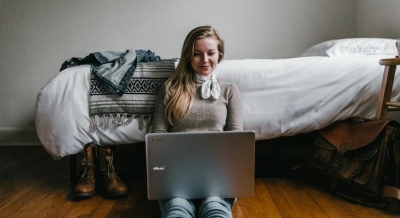 New Delhi– While working from home, women are four times more likely to be perceived as being less productive than male counterparts, a new report revealed.

As companies rushed to set up remote offices in the first part of 2020 due to the lockdown, it became clear that the work-from-home requires rethinking on how we work, especially when it comes to the success of working women across every stage of their careers.

However, according to ‘The WFH Inclusivity Conundrum’ by Kearney, women living with family members are five times more likely than men to experience an increase in the burden of domestic chores while working from home.

It further added that more than 40 per cent companies are still following rudimentary forms of work from home that tend to further exaggerate the homogenous groupings in predominantly male workplaces.

“While working from home, women are four times more likely to be perceived as being less productive than male counterparts. The fear of adjudged as unproductive further prevents women from talking openly about mental health issues,” the report said.

“The world moved to remote working so rapidly that we couldn’t stop and design a workplace that was truly inclusive. Top-down, conscious changes in the way we interact, disseminate information and design policies will impact how women progress within organisations.”

The report suggested that there is no one-size-fit-all approach to developing an online-first workplace that will ensure an inclusive environment. But three pillars can help build the first set of actions toward increased inclusivity:

Increasing workplace flexibility: Having the ability to choose working hours, personal time-off, and breaks during the day while also managing household duties and taking time to maintain mental health are crucial.

Avenues for formal and informal networking: Democratization of opportunities to network is crucial to eliminating workplace groupings.

Saumya Krishna, Partner, Kearney India said: “It is clear that lifting and shifting the workplace into homes will simply not work. Especially not for women. Women are losing out on networking opportunities, global interactions and avenues for mentorship and sponsorship, post COVID. We need to redesign workplaces, restructure forms of interaction and communication. Otherwise, we take one step forward for work and two steps back for women at work.” (IANS)