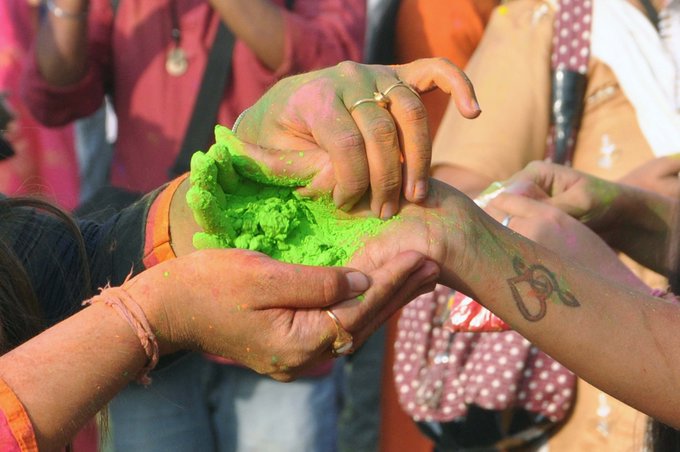 Raipur–Chhattisgarh is all set to celebrate a herbal Holi this year. Several self-funded groups of women have prepared herbal gulal using flowers offered in temples and bouquets received by Chief Minister Bhupesh Baghel.

Women’s groups have prepared herbal gulal from flowers collected from different temples across the state and flowers of bouquets received by Baghel. These women have also handed over a packet of herbal gulal to the Chief Minister.

Experts believe that herbal gulal is not harmful for skin and does not have any side effects on health. In fact, it provides a cooling effect to the skin.

Organic or herbal gulal made from flowers, fruits and ingredients like turmeric, marigold, rose, beetroot, spinach, pomegranate are beneficial for health, experts said.

Another group Bihaan women’s self-funded group has prepared herbal gulal from flowers offered at the Bhoramdeo temple in Kawardha and bouquets received from the Chief Minister’s residence.

“I am pleased to know that women have used the flowers collected from temples to prepare gulal. Similarly, flowers used in marriage ceremonies and other cultural programmes are also being used to make the herbal gulal. I would like to thank these groups of women.”

Women from Raipur district’s Serikhedi have made eight quintals of Gulal so far. Moreover, these women are using vase pages and wrappers to pack soap and they are using the remaining sticks and leaves to make organic manure.

Similarly, in Kabirdham district, herbal gulal is being prepared from flowers offered by devotees in the famous Bhoramdeo temple, which is also known as Khajuraho of Chhattisgarh, by Jai Ganga Mayya women’s self-funded group.

The group has prepared herbal gulal in nine different colours. Everyday devotees at the Sri Bhoramdeo temple offer around 200-300 kg flowers. As per reports, the temple collects about 400-500 kg of flowers on weekends. (IANS)