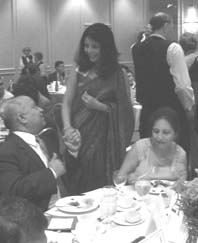 NEWTON, Mass. – Gouri Banerjee, founding member and director of the domestic violence program at Saheli, won the INDIA New England Woman of the Year 2005 award at a gala awards dinner on June 17. She is also an associate professor of technology of information technology at Emmanuel College. Saheli, a Burlington, Mass. based support organization for South Asian women, was formed nine years ago as the women’s wing of the India Association of Greater Boston. Banerjee, in her role as head of the domestic violence unit, has helped physically abused women regain their life, by offering monetary, legal and medical help, as well as helping them get their first jobs and apartments. “I have never won anything… not even a stuffed toy at a fair,” Banerjee said, after receiving the award. “The best way to find yourself is to heed the voice inside you [that asks you] to serve others. It’s because of the work of the Sahelis [members of the organization] that I’m getting this award,” Banerjee acknowledged. “Women’s work in society needs to be valued, and this award is a great way to do that.” Special guest, New England Cable News reporter Beejal Patel, announced the name of the winner at the event, which was attended by over 300 people. “Let’s continue to set our goals high,” she said in a short speech. “If you believe in yourself, your dreams will become reality.” The runners-up were Sgt. Alpa Ladani of the Connecticut Army National Guard’s 118th Battalion, who served in Iraq for 15 months and recipient of the Army Commendation Medal and Dr. Veena Desai, two-time recipient of the Republican Senatorial Medal of Freedom. Banerjee was chosen from 20 finalists, who were evaluated by an editorial board. “This is a wonderful event that recognizes and celebrates some of the incredible contributions South Asian women have made to this region’s business and social community,” said Peter Glaser, associate publisher of INDIA New England. Last year’s winner was Tejal Desai, associate professor of biomedical engineering at Boston University. The first winner of the award in 2002 was Nandita Bakshi, now managing director of Mobile Solutions, a unit of First Data Corp., and executive vice president of consumer deposits and payments at FleetBoston at the time of receiving the award.