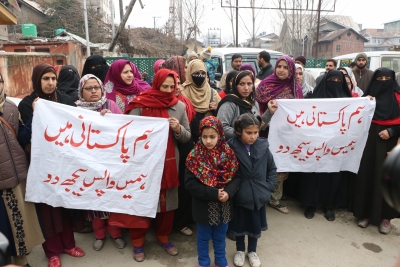 Srinagar– Pakistani wives of former Kashmiri militants who came here under the State government’s rehab policy on Saturday appealed to Prime Minister Narendra Modi that they be given travel documents to go back to Pakistan.

Holding a protest here on Saturday, the group of Pakistani women said, “Hum Pakistani hein, hamein wapas bhej do (We are Pakistanis, send us back).”

They appealed to Modi and Pakistan Prime Minister Imran Khan that since they had been provided no rights as promised under the rehab policy announced by the State government in 2010, they must be allowed to go back.

Under this policy, many former militants had come back to the state along with their wives to live a normal life after abjuring violence.

“We are now harassed like criminals. We have not infiltrated into the state, but came here in response to the policy announced by the state government.

“Now that the promises made to us have not been fulfilled, the least the Indian and Pakistani governments can do is to provide us travel documents so that we can go back to Pakistan,” said one of the women proteesters.