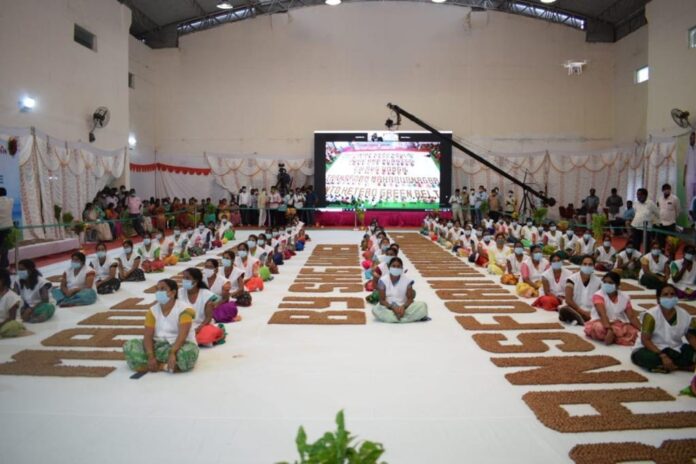 At an event held at Mahabubnagar, the women arranged the seeds balls to make the sentence – “Two crore seed balls made and planted by SHG women transform Mahabubnagar into Hetero Green Belt”.

Women from Palamuru Zilla Mahila Samakhya (PZMS) or the federation of women self-help group of Mahabubnagar district and the Mission for Elimination of Poverty in Municipal Areas (MEMPA) set the record under the leadership of Telangana minister V. Srinivas Goud and senior officials.

The seed balls were planted with the help of drones at the KCR Urban Eco Park spread over 2,097 acres.

The minister organised the event in the presence of Santosh Kumar. They coordinated the Guinness World challenge from the Mahabubnagar Railway Auditorium.

Santosh Kumar thanked all the people who took part in this record making event. He thanked the minister for making him and his initiative of Green India Challenge part of the grand event.

Last year, the International Wonder Book of Records had recognized the initiative taken up by the PZMS to grow greenery and increase forest cover in the district.

The PZMS had constituted SHGs from more than 284 villages and prepared more than 1.14 crore seed balls in nine days and threw them across open areas surrounding the forest regions in the state both manually and through drones. (IANS)