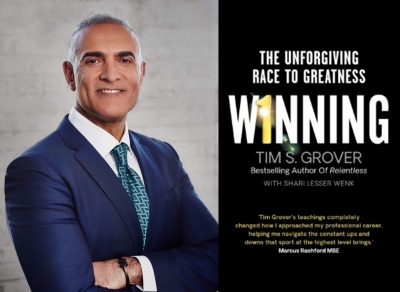 New Delhi– “The most important thing in the Olympic Games is not winning but taking part; the essential thing in life is not conquering but fighting well,” Baron Pierre de Coubertin, the founder of the International Olympic Committee and the driving force behind the revival of the modern Olympic Games in 1896, had famously declared.

Perhaps the only example of this was immortalised in the film “Chariots of Fire” when Eric Liddel of Great Britain refused to run in the 100 metres heats at the 1924 Paris Olympics as his Christian convictions prevented him from running on the Sabbath. It made headlines around the world.

Sounds like an oxymoron in today’s world, when all that matters, whether in sports or life, is the winning?

“Winning puts you on the biggest stage. And shuts off all the lights,” elite performance coach Tim S. Grover writes in “Winning – The Unforgiving Race To Greatness” (Simon & Schuster) as he strips away the clichï¿½s that create mediocrity, and challenges you to embrace reality with a single-minded intensity.

“I’ve seen Winning in all its glorious generosity, and all its excruciating cruelty. One day it wears a halo. The next day it has fangs. You don’t get to decide which it will be. You can only chase it, and if you’re willing to pay the price, you might catch it. Briefly,” writes Grover, who was born in London of Indian parents, offering a brutally honest 13-point formula for winning in sports, business or any arena where the battle is fiercely unforgiving.

“Winning is everywhere. Every minute, you have the potential to recognise an opportunity, push yourself harder, let go of the insecurity and fear, stop listening to what others tell you, and decide to own that moment. And not just that one single moment, but the next one, and the next. And before long, you’ve owned the hour, and the day, and the month. Again, Again.

“It doesn’t happen all at once…For everyone, there are endless setbacks, challenges, roadblocks, letdowns, and issues that force most people out of the race,” writes Grover, who is world-renowned for his work with Michael Jordan, Kobe Bryant, Dwayne Ward and thousands of athletes and business professionals and is the Founder-CEO of Attack Athletics Inc.

“Winning requires you to be different, and different scares people. So if you’re worried about what others will say, the long-term effects, the sacrifices you’ll make, the sleep you’ll lose, your family being angry…I can’t help you with that. There’s nothing ï¿½typical’ about the lifestyle and choices you’ll have to make. Winning is inside all of us, but for most, that’s where it will stay, trapped under a lifetime of fear and worry and doubt,” Grover asserts.

So, how does one describe Winning in one word? Uncivilised, Hard, Nasty, Unpolished, Dirty, Rough, Unforgiving, Unapologetic, Uninhibited, Everything – that’s how the greats Grover has worked with have termed it.

“If that describes your journey and how you attack your goals, we are speaking the same language,” Grover writes as he unveils his 13-point formula that he says can be read in any order:

WINNING wages war on the battlefield in your mind.

WINNING is the ultimate gamble on yourself.

WINNING isn’t heartless but you’ll use your heart less.

WINNING belongs to them, and it’s your job to take it.

WINNING wants all of you, and there is no balance.

WINNING takes you through hell. And if you quit, that’s where you’ll stay.

WINNING is a test with no correct answers.

WINNING knows all your secrets.

WINNING is not a marathon, it’s a sprint with no finish line.

“Winning will cost you everything, and reward you with more, if you’re willing to do the hard work. Don’t bother to roll up your sleeves, just rip the fucking things off – and do what others won’t or can’t. They don’t matter anyway; you are in this alone.

“Stop being afraid of what you’ll become. You should be more afraid of not becoming that.

“If you can’t buy into this, if you believe you’re not ready or not deserving, if you’re not willing to commit to your own success, you’ve never won, and you probably won’t. Because winners all understand one thing: There’s a price to pay and you must pay it,” Grover maintains.

Contending that in the language of Winning, there is no talk about motivation, he writes that motivation is for those who haven’t decided whether to commit to their goals, or how much time, effort, and life they’re willing to invest to achieve them.

“I’m not measuring their level of success – someone can be broke or out of work or overweight or in a bad situation, and extremely motivated to change that. I’m talking about their need to have others to push them into action with a swift kick in the ass.

“I don’t work with clients who need that kick in the ass. If you come to me, I need to know that you are already kicking your own ass, and you’re ready for more. Likewise, I’m not a ï¿½motivational speaker’. I don’t write motivational books. I don’t want to ï¿½fire you up’ – that’s your job. My job is to take your greatest achievements and build on them. I want to speak to you in a language that takes your best work and makes it better.

It’s up to you now! Do you have what it takes?(IANS)