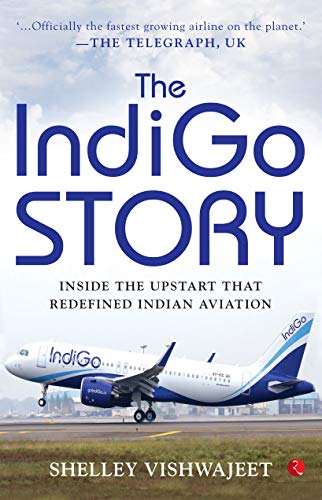 On June 16, 2005, at the Paris Air Show, a little-known Indian budget airline, IndiGo, hogged the world’s attention by ordering 100 A-320 jets from global aerospace major Airbus at Toulouse in southern France.

“The deal was worth $6 billion at list price. The news made global headlines and the audacity of it all stunned everyone. Indeed, till then, no airline in India had ever thought of ordering so many planes at one go. The order was simply audacious,” recounts author Shelley Vishwajeet in this non-fiction book.

Delhi-based Vishwajeet, a business and political journalist, explores through this title the reasons for the success of low-cost carriers, particularly IndiGo, while offering rare insights into the Indian aviation industry.

With a no-frills narrative, the 51-year-old author relies on historical records, reports of the aviation regulatory body, the Directorate General of Civil Aviation (DGCA), since the 1970s, and innumerable annual reports of airline firms, including IndiGo’s, to provide an extensive history of Indian aviation.

“It took a year of going through thousands of documents to logically arrive at the reasons for the success of low-cost carriers in India and abroad, so as to provide the reader better understanding of the aviation sector,” Vishwajeet told IANS.

As stated in the Foreword by Mark D. Martin, Chief Executive of Dubai-based aviation advisory firm Martin Consulting, air travel in India till 2005 was designed to suit the “mature (and ridged) baby boomers” (born from the 1940s to the 1960s).

Co-founded by Rahul Bhatia and Rakesh Gangwal in 2005, IndiGo — India on the go — was, on the other hand, appealing to a newer generation of flyers, the millennials (born after the 1980s), for whom air travel was just another mode of transport, Martin adds.

The book presents the inside-out of various airline businesses that have been in India along with IndiGo like the state-run Air India, Jet Airways, Go Air, SpiceJet and the defunct Kingfisher Airlines, including their financial details and operational mechanisms.

While Kingfisher was facing a cash crunch, its owner, tycoon Vijay Mallya, was in a “tearing hurry” to fly on overseas routes after acquiring the country’s first low-cost airline, Deccan Charters, in 2007 and floating a low-cost arm, Kingfisher Red, which led to him bleeding losses, the author writes.

IndiGo, however, adhered to the principles of keeping operational costs low and on-time performance, Vishwajeet analyses. It is currently India’s largest airline, with a market share of 42.8 per cent (Jet Airways is a distant second at 14.9 per cent) and close to 200 aircraft.

“Kingfisher was trampled because of its mounting debt and rising finance cost while IndiGo ensured stringent operational and financial management and a disciplined execution of its low-cost model,” he recounts.

The choice of the Airbus A-320 was also a “well thought exercise to keep finance and operational costs down”.

The airline also opted for lighter seats as the lower weight of an aircraft translates into higher fuel efficiency, Vishwajeet assesses.

Due to its low-cost model, Gurugram-based IndiGo has managed to make a profit over the past 10 years, barring its first two years into operations. (For Q2 this year, however, IndiGo reported its first-ever quarterly loss since its listing — of Rs 652 crore.)

“Between 2008 and 2011, when every airline was bleeding due to rising jet fuel costs, IndiGo managed to squeeze profits.”

The author also takes the inquisitive reader through several lesser known red-letter events of Indian aviation — dating back to 1911 when the world’s first airmail service started in India, with a French pilot, Monseigneur Piguet, flying with 6,500 letters over the Yamuna river from Allahabad in what was then the United Provinces of Agra and Oudh (now Uttar Pradesh) to Naini, some 11 km away.

Availability of military aircraft post World War II was said to have spurred air services in India and the world over.

Though IndiGo remains a smart protagonist in the book, the author delves into the events that gave the company a bad name, such as clashes with passengers, including incidents of a flyer being man-handled by its ground staff in New Delhi last year and a Bengaluru doctor being offloaded over complaints of mosquitoes in the cabin, among other such instances.

According to aviation analyst Martin, who is interviewed by the author in the book, IndiGo, however, remains a “revenue machine that is on a turbo-charger and revved up to take on the best of the best”.

As the company has ambitious plans to fly to 24 new foreign destinations by 2020, it remains to be seen how IndiGo fares against its Indian and global low-cost rivals.

Raising several key questions on the survival of India’s airline industry, the book makes for an informative read for all, particularly aviation enthusiasts. (IANS)